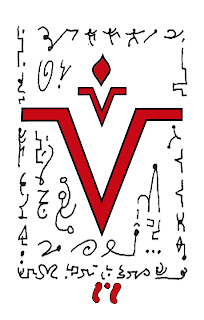 The Astroshamanic Seals are holistic healing tools meant to support the retrieval of our multidimensional awareness, releasing the human separated conditioned identity and reawakening our authentic nature.

They operate in accordance to the Astroshamanic Binary System, consisting of 12 matrix seals, 144 binary seals, exemplifying the 144 combinations between Sun and Moon, and further seals related to specific astroshamanic features.

The Astroshamanic Seals are basically designed to operate on the Paheka Rubhe, a multidimensional net which strategically hold our human separated reality, or Human Arbitrary Configuration.

The Astroshamanically Seals were received from  to , through a long series of daily astroshamanic voyages both in the Higher and the Lower World, inspired by the strategic healing saint Kurandah. The guidance received in those years implied operating them first within a close group of astroshamanic practitioners for twelve years, and then making them more widely available as from .

The Astroshamanic Seals have been described as “the seeds of multidimensional manifestation, creating a magnetic field aimed at releasing trapped second and fourth dimensional entities, blocked emotional and stagnant thought forms, in order to expand multidimensional awareness and free circulation.”

Astroshamanic Seals can be used to activate dormant potentials and creativity, transmuting grievances and dysfunctional behaviours as compost to support honourable intentions.

They are employed in various practices, such as astroshamanic healing touch, trance dance, journeys, meditation, postures, as well as in everyday life.

Astroshamanic Seals are regularly featured in this blog, with every Sun and Moon binary, and are also available in the blog Pahekarubhe.