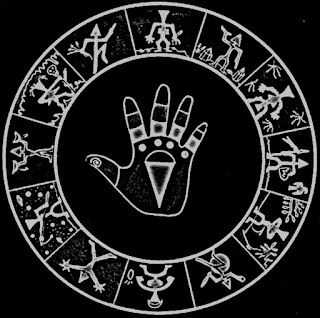 The Astroshamanic Binary System identifies the operating system of the human separated mind, the ego, a binary programme based on dualism, polarisation, division into subject and object, as well as the gateway to the programme upgrade through  release, healing, retrieval of our fragmented parts, multidimensional awareness, expansion and unity of consciousness, oneness.

The Astroshamanic Binary System () comprises the 144 combinations between the Sun and the Moon position in the 12 Sectors of the Sacred Circle, the astrological signs, which represent here the fragmented parts of human split consciousness.

Hence, for Sun in Libra and Moon in Aries, the reference is 7.1. The Astroshamanic Trinity System (ATS) also incorporates the zodiac sign of the Ascendant.

They are the emanation point of all the ordinary and less ordinary substances and devices that alter human mood, behaviour, perception, or mental functioning.

In advanced astroshamanism binaries are ingested as core psychoactive essences, through astroshamanic binary glyphs, sounds, potions, postures, healing touches, primal embraces and substances. They are also applied to territories, both ordinary, such as in the Provisional Territorial Units, and non-ordinary, such as the Handorian State System (1), to words (Provisional Alphanumeric Codes) and individual natal charts (Provisional Natal Codes).

Their intake is a vibratory experience occurring either through natural voluntary exposure (when the condition of the binary are spontaneously generated by the environment, for example: during the days of the related Sun-Moon combination, by moving through a location that is aligned with a given binary, etc.) or virtual voluntary exposure (when the binary is purposefully selected by the recipient through the access to the Binary Net, for example by binary positioning in the Sacred Circle, using binary drumming or chanting, or through the Basic Ritual of the Sacred Cone).

In the astroshamanic cosmogony the human separated reality, or Human Arbitrary Configuration (HAC) is strategically caused by the Paheka Rubhe, a net generated by the 144 binaries created by 12 Astroshamanic Core Templates, or Totem Spirits, also known as Paheka.

The Paheka strategically constitute the basic archetypes and the original models from which all human perceptions and experiences derive. Each one of them is a specific aspect of the wholeness as it appears from the limited perspective of our separated reality, or Human Arbitrary Configuration (HAC).

Astroshamanic Core Templates correspond astrologically to planets or constellations, and mythically to the gods or heroes of the various civilizations that have developed or arrived on this planet. To the first inhabitants on Earth, they appeared in their purest form. With the reinforcement of the process of separation, these archetypes assumed frozen manifestations and complex patterns that then multiplied abundantly in countless subsidiary types. They all started from one, the fragmented into 12 (Core Templates), 144 (Binary Templates), 1728 (Ternary Templates), etc.

Astroshamanic Core Templates literally represent the patterns of reproduction that shape our entire human perception of reality. They are the generators of the collective dream that keeps our world trapped into what can be described as a simulated grid of projections.

(2) Depending on the day and time a given trinity is at work in the Handorian States System, the Provisional Territorial Units and alternative systems.
There are two ways for identifying it, which you can use at your discretion. Please see them below:
Aries from 6 to 8, or from 0 to 1, and 12 to 13


Pisces from 4 to 6, or from 11 to 12, and 23 to 24
Depending on the time you choose you will find yourself in the related trinity and can visit any of the places therein. When travelling from different time zones, you can agree on one time, though ideally it would be preferable, if possible, that both times zones fall in the same trinity.