The Devil - Capricorn: An Astroshamanic Voyage into the Tarot (by Franco Santoro) 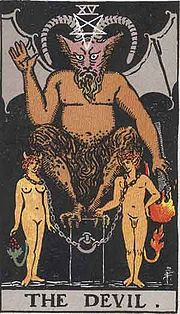 For the introductory article to this series please click here.
In most traditional tarot decks Capricorn is associated with the Devil, the fifteenth trump of the Major Arcana.

In the Rider Waite Tarot the Devil is depicted squatting on a small altar where two naked demons, male and female, are held in chain. He keeps his right hand raised, with his palm depicting the astrological glyph for Saturn, the ruling planet of Capricorn. In his left hand he holds a flaming torch. His forehead features a reversed pentagram, which is a symbol of matter triumphing over spirit.

The pentacle is also a representation of the human body, and when it is reversed the genitals are above the head, indicating sexual desire or reproduction prevailing over higher consciousness.

Although the Devil is conventionally regarded as antagonistic or opposed to God, its etymology discloses a striking and controversial affinity. The term “devil” derives from the Indo-European deva, which is the Sanskrit word for "god, deity". As a result, many languages directly descended from Sanskrit, such as the Gypsy language, use the term devil as the name of God. Also in many other cultures the name used for God in ancient times became the term employed to identify the devil and also vice versa.

For the Gnostics, the Old Testament god, Yahweh, is indeed regarded as a demonic and evil being, as opposed to the true God. The Devil is here a lower god, a flawed consciousness, a Demiurge, the creator of the physical world where we live and the author of the realm of separation (kenoma), or Human Arbitrary Configuration (HAC).

The most common meaning of the Devil relates to its capacity to generate illusions and arbitrary limitations. The main of such illusions is the perception of a separated reality, and the lack of awareness of whatever exists beyond the physical world.

In general, the Devil is a card of bondage and addiction, which may range from one’s entire experience of life or to just a specific area. It can therefore refer to my whole perception of reality, when this is based on rigid belief systems that exclude and deny whatever does not belong to them. It can also relate to one particular aspects of life, such as eating, smoking, or drinking where I may be enslaved or also have preconceived ideas. The Devil applies to addictions as well as to attitudes of excessive control and rigidity, which are still forms of bondage.

The trump can traditionally indicate a situation where the individual is blocked, dominated by his narrow mind or by strong obsessions, vices, sexual urge or other things that are usually regarded as abominable or unacceptable. It may indicate a binding attraction towards people, behaviours or situations that the individual hates, and yet he is unable to stop either because the urge is too strong or due to fear of consequences. It can be an invitation to being aware of such obsessions and urges, not allowing them to spread unconsciously or taking some action so that they are safely released or transformed.

The Devil may also denote an invitation to take it easy in a certain situation and accept to be a bit mischievous, not getting too serious, controlled or rigid, letting go of shyness and fear.

Yet, there is a deeper element in the Devil, which constitutes the arcane essence of this trump. In this respect it stands for an awesome resource of power, which the seeker needs to master in order to move on the path.

This power is a most terrifying element, something generally regarded as wicked or sinful, which may be seen as such simply as a result of deeply rooted conditioning and denials. Here the Devil relates with the crucial use of sexual energy, in all its expressions, and its capacity to raise our multidimensional awareness and liberate us from the bondage of separation, or to cause obsession, addiction and violence.

The awakening of our multidimensional nature is a most ecstatic experience with radical effects on every aspect of our perception, especially the physical body. Yet there are very close links between these ecstatic experiences and addictive, violent or weird behaviours.

The neural activity our brain produces whenever facing any extreme, shocking and risky situation, no matter whether this is a shamanic experience or a criminal act, is basically the same, and this can lead to a lot of confusion. The borderline between enlightenment and insanity, ecstasy and perversion is very thin, which is what makes the shamanic path a most controversial and often perilous one.

Pan is an all-embracing god comprising all aspects of life. His name means “all”, and was given to him by the gods to acknowledge the libido drive as the all-inclusive feature of the entire universe. Hence Pan is the god of everything and everyone, HAC and non-HAC, good and evil, representing the Great Whole at all levels, from the most intense physical sensuality to the peaks of transcendental asceticism.

To the people of ancient times Pan represented the complete spirit of unity, blending the apparent polarities of the third-dimensional world, life and death, day and night, light and darkness. Pan was once the most popular god in the western world and his horned statues could be found more abundantly than those of any other god. Yet, since Pan was the god of unity and multidimensionality, when the current HAC took over, there was no place for Pan anymore and the emerging HAC cultures began to demonise him. Hence, soon Pan became the Devil.

Pan is mythically located in the constellation of Capricorn and is the representation of Saturn, and the original inspirer of the Saturnalia. Shamans and healers of ancient times would embody the spirit of Pan especially on the Winter Solstice, in order to preserve the balance between polarities and the alignment to the vertical axis, or Core Multidimensional Identity.

The ancient Pagan custom to gather around an evergreen tree, revived with the current Christmas Tree, is connected with another obvious feature of Pan: i.e. Father Christmas or Santa Claus.

Santa and Pan are alter egos, sharing the same nature in different contexts. Just move the n of Santa to the end and you get Satan! There is a legend that Pan died at the exact moment of Jesus’ crucifixion. Pan’s alleged death was supposed to represent the end of Paganism or, more pragmatically, the separation from our Core Multidimensional Identity and the castration of our human original ecstatic nature.

The legend about Pan dying at the same moment as Jesus, may obliquely imply that Pan is also born, like Jesus, at Christmas. Hence, watch out!