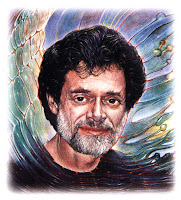 Terence McKenna: (8.6.8) Most popular psychedelic author, techno shaman and skilled orator. McKenna devoted his life to the study of the ontological aspects of shamanism and the effects of food and drugs on human states of consciousness.

One of his most intriguing theories regards the origin of the human mind and culture.

McKenna argues that some of our primate ancestors left the branches and took up a hunter life out in the open following around herds of ungulates (hoofed mammals) and eating what they could along the way. Among the new ingredients of their diet were psilocybin-containing mushrooms growing in the dung of these herds.

One of the changes caused by the use of this drug  was synesthesia (the blurring of boundaries between the senses), which caused the development of spoken language: i.e. the ability to form pictures in another person's mind through the use of vocal sounds.

McKenna wrote: "We wouldn't be here if it weren't for psychedelic drugs. In terms of the role of psilocybin in human evolution on the grasslands of Africa, people not on drugs were behind the curve. The fact is that, in terms of human evolution, people not on psychedelics are not fully human. They've fallen to a lower state, where they're easily programmed, boundary defined, obsessed by sexual possessiveness which is transferred into fetishism and object obsession. We don't want too many citizens asking where the power and the money really goes. Informed by psychedelics, people might stop saluting. 'Take your political party, your job, whatever, and shove it.'

McKenna also believed that tryptamine-based organic hallucinogens, such as those found in ayahuasca and psilocybin, were tools for communication with other forms of life in the universe, either in what he called "hyperspace" or even literally on other planets. He was intrigued especially by the fact that hallucinogen users seemed to go to the same multi-dimensional places, realms inhabited by entities he referred to as "self-transforming machine elves”.

Among his numerous books, Food ofthe Gods is probably the most popular and also the one more closely associated with his birth binary 8.6 (Sun in Scorpio and Moon in Virgo). The book is a detailed account of food and drug use throughout human history. McKenna was particularly against refined sugar for its addictive qualities and negative health effects, pointing out its devastating impact on human consciousness. He stressed that numerous wars were fought over sugar, with entire generations being condemned to slavery in the service of its cultivation, as opposed to the innocent mushroom which only ever wanted to make people happy.

McKenna affirmed that plant hallucinogens are threatening for current cultures because they undermine authority structures by democratically giving all users equal access to the big picture: "Because modern institutions depend on the transmission of a certain world view and then willing acquiescense in the truth of that world view by the populations into which it is being exported. In other words a kind of cultural brainwashing is necessary for modern cultures to work at all. The consequences of the acceptance of this situation of brainwashing is further acceleration toward catastrophe."

“For monkeys to speak of truth is hubris of the highest degree. Where is it writ large that talking-monkeys should be able to model the cosmos? If a sea urchin or a racoon were to propose to you that it had a viable truth about the universe, the absurdity of that assertion would be self-evident, but in our case we make an exception.”


“The problem is not to find the answer, it's to face the answer”
“You have to take seriously the notion that understanding the universe is your responsibility, because the only understanding of the universe that will be useful to you is your own understanding.”
“The syntactical nature of reality, the real secret of magic, is that the world is made of words. And if you know the words that the world is made of, you can make of it whatever you wish.”
“You are an explorer, and you represent our species, and the greatest good you can do is to bring back a new idea, because our world is endangered by the absence of good ideas. Our world is in crisis because of the absence of consciousness.”
“Ego is a structure that is erected by a neurotic individual who is a member of a neurotic culture against the facts of the matter. And culture, which we put on like an overcoat, is the collectivized consensus about what sort of neurotic behaviours are acceptable.”
“You are a divine being. You matter, you count. You come from realms of unimaginable power and light, and you will return to those realms.”
“The purpose of life is to familiarize oneself with this after-death body so that the act of dying will not create confusion in the psyche.”
“If you don't have a plan, you become part of somebody else's plan.”
“My technique is don’t believe anything. If you believe in something, you are automatically precluded from believing its opposite.”
“The shaman is not merely a sick man, or a madman; he is a sick man who has healed himself.”
“There’s light at the end of the tunnel. The problem is that tunnel is in the back of your mind. And if you don’t go to the back side of your mind you will never see the light at the end of the tunnel. And once you see it, then the task becomes to empower it in yourself and other people. Spread it as a reality. God did not retire to the seventh heaven, God is some kind of lost continent IN the human mind.”


Click here for our calendar of holistic and astroshamanic events.
For individual consultations with Franco Santoro and Associates click here