Pisces - Astroshamanic Voyage into the Zodiac (by Franco Santoro)

Within the cycle of the year, Pisces is crucial for it represents the culmination of the gestation of any intent or process set in motion in the preceding months, as from the spring equinox in 2011.

It is a very delicate period, in which new talents and gifts take solid shape and prepare for their outer emergence, yet in a context where we may still be unable to acknowledge and see what is actually emerging.

This requires focus, care and alertness so as to embrace the opportunity of giving fruitful conscious birth to what truly aligns with our authentic potential, including the current planetary transformational shift. Each one of us is dealing with a specific element in this wider process of delivery. Here I want to underline that these elements gain considerable clarity, perspective and definition when they move from our personal limbo out into the collective. We can become truly aware of our emerging gifts and talents when we allow them to be visible and acknowledgeable by others, instead of breeding them in isolation.

After many years of working shamanically with people I have realised that the majority of individuals are unable to identify their own talents and often even regard them as negative or harmful. Hence they may continue to bury them for ages, unless they accidentally or forcefully happen to disclose them and receive positive feedback from others.

Hence, when you notice something beautiful in the people you meet, even when it is so obvious and you feel it may appear stupid to point it out, well, please be honest and appreciate them anyway. What is obvious for you may not be obvious at all for the person involved.

Pisces is a huge melting pot, thriving on connections and all forms of blending, inviting us to surrender to the multidimensional ocean of life and death, sharing who we are and receiving the sharing of others, in an ongoing process of giving and receiving, which eventually loses sight of the outdated difference between subject and object, ecstatically proclaiming the unexpurgated and immaculate wholeness of our nature. Deep breath…

Among all the signs of the zodiac, Pisces is the one closest to the experience of multidimensional realities. Placed in the last stage of the zodiacal path, it represents all potential peaks in human consciousness. Here the zodiac circle reaches its final stage and can either face a quantum leap, moving into a brand new definition, or get back to sector one (Aries), repeating the same cycle all over again. 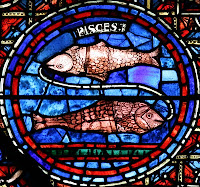 Pisces holds the key to the forbidden threshold of the zodiac, the one that allows the shift into the multidimensional realm, the movement into the spiralling cycle and the release of the karmic wheel. Hence, during the period of Pisces, it is easy to experience confrontations with threshold situations, glimpses of alternative lives and parallel universes, together with feelings of bewilderment, confusion or fear, as they are perceived by our ordinary identities.

Alignment with the essence of Pisces bestows the capacity to unveil multidimensional portals or itineraries. This is possible or easier when blocks and grievances have been effectively released through journeys in the preceding signs. When this is not the case, Pisces may become an excruciating vortex of hallucinations and turmoil.

Pisces includes the whole spectrum of identities we employ to voyage in the intricate landscape of our multidimensional self. Hence in Pisces resides the possibility of either unveiling their common source or preserving their separation.

Pisces has a close association with Dionysus, also known as Bacchus, the god of ecstasy, trance and dance. Similarly to Pisces, its origins and nature are confused and assorted. According to one myth he is the son of Zeus and a mortal woman (Semele), who is killed by Zeus himself while Dionysus is still in her womb. Dionysus is then exceptionally born from the thigh of Zeus. Given that Hera was furious about this birth, Zeus entrusted Dionysus to the Hyades, a group of nymphs who disguised the god as a girl and raised him as an androgyne. In the Orphic mysteries Persephone, queen of the Underworld, is the mother of Dyonisus, whereas in the Elusinian mysteries it is Demeter.

All major references in the Dionysian mysteries are common features of shamanic initiation practices such as dismemberment, trance dance, communion rites, vision quest, sacred embrace, sacrifice, including the Basic Ritual of the Sacred Cone. In the Dionysian and other mystery traditions, ordinary ethics, social status and comfort have never been an element of concern. Their primary focus is gaining multidimensional awareness, which often involves radically infringing ordinary taboos and conventions.

Pisces’s ruling planet is Neptune, a planetary force associated with spiritual enlightenment, mysticism, multidimensional art, trance, visions, as well as with addiction, confinement, confusion and madness. The position of Neptune in an astrological chart is useful for it may indicate the areas of life that can best promote experiences of trance, ecstasy and whatever bestows holistic awareness.

Neptune is one of the outer planets and takes about 164 years to move through the entire zodiac, spending 13 years in each sign. Its transits identify an expanded potential for non-ordinary experiences. If the individual concerned aims at connecting with his multidimensional nature, Neptune’s transit can bring significant visionary events, lucid shits in parallel universes, extreme artistic creativity and profound expanded states of consciousness. On the other hand, for people who are strongly conditioned by consensus reality, Neptune can cause nebulousness, confusion and depression. What seemed to be certainties about one’s life may dissipate or unveil unexpected developments.

Neptune has recently (4 February 2012) entered Pisces. This means that those who have astrological angles or planets (especially the Sun, Moon or Ascendant) between 0° and 5° Pisces are likely to perceive potent Neptune effects during 2012. A similar situation also applies to those with relevant planets between 0° and 5° Pisces, Virgo, Sagittarius and Gemini, while for folks who have Sun, Moon or Ascendant between 1° and 5° in Cancer and Scorpio, Neptune is also significant, yet perhaps in a more easygoing or less challenging way.

During this Pisces cycle we will feature further articles on the nature of this sign  Hence keep connected with the posts on this blog.