During dreaming the soul goes on a journey. It travels through various layers and reaches dimensions of wisdom emanating from ancient or future times. The effects of this original past and future constitute the reality of our life as we perceive it in the present.
This wisdom reveals itself through dreaming experiences where the basic myths of the universe directly express themselves. Such dreams can be recognised by the fact of providing, upon waking up, a strong sense of wonder or mystery so that the dreamer is tempted to talk about them.
Among many tribal cultures these dreams were very frequent and were given much attention. They delivered messages from ancestors and beings dwelling in subtler dimensions.
Dreaming was not regarded as something personal or private. It was a tribal and sacred activity that could provide guidance for the whole community.
It  also contributed to retrieve ancestral memories of the processes which brought about the hallucination of separation. These people attributed to dreams a significant role in the weaving of their sacred story. With sacred story I mean the places and paths journeyed by our soul, the myths inherited from our ancestors and past traditions, the story of our family, the major events in our life, and all the patterns which can be perceived in the universe. 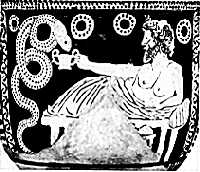 Delete what went wrong and substitute the undesirable sequence with a right course of action.
For example, if you were rude with your partner, see yourself being gentle and giving attention to her. Then strongly affirm that the next time you are presented with a similar scene, you will conform to your highest Intent and Function.
As you continue to review the day you can also notice if you have collected unpleasant emotions and ideas. Release them and allow them to be transformed, and reaffirm your commitment to your sacred path.
When you have completed the whole process, give yourself the task of simply looking at your hands. It does not matter whether this is going to happen that same night, just repeat this practice every time you go to sleep. Then count back from twelve to one, affirming that you will remember all that occurs during your dreams.
Upon waking up, stretch yourself like a cat, give thanks for what happened throughout the night, and note it down in your journal. If you have difficulties in recalling the dreams, try and wake up gently, lying in a relaxed state for some moments. Then make an effort to remember the first feelings or thoughts that came to your mind upon waking. These will help bring back the content of your dream and also give indications about its deeper essence.
If you still feel unclear about your dream, make sure to identify any image or detail that you recollect. Write it down or draw it, no matter how incoherent it may seem. These fragmented pieces usually act as catalysts and spontaneously draw significant information at a later stage during the day.
By employing the above process you have the chance to clear and release from your system any grievance that may have caused harm to you and others. You will gradually start to acknowledge the basic scripts of your life and release what blocks your Intent. Take note of what happens to you every day and operate with simplicity.
By observing carefully, you will notice how the astrological events of the day (position of Sun and Moon, lunar phase, etc.) are related with your dreams.
Please be aware that walking a healing path involves remembering your Intent and true nature in the midst of all kinds of altered states of consciousness and problems in your life.
Please click here for a list of our programmes
For individual consultations with Franco Santoro & Associates click here