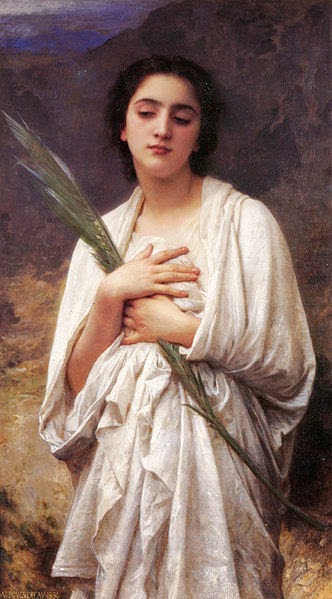 Palm Sunday marks the start of the Holy Week, from the Sunday before Easter.  Easter in Western Christianity is observed on the Sunday following the first full moon after the Spring Equinox. Since this year the Equinox was on 21 March and the Full Moon is on 15 April, Easter is then on 20 April 2014.

The Spring Equinox exemplifies the opening of the Horizontal Axis, just as Maundy Thursday represents its conclusion with Jesus’ sitting among the 12 apostles, washing their feet and dispensing the Eucharistic gift.

The Holy Week can be a most precious preparation and launching pad for any sacred vision or goal that we deeply treasure. In this process it is vital to discriminate between ego’s achievements based on separation and goals inspired by a genuine connection with God.

The term "God" is meant here as Light, All That Is, Undivided Self and Unconditional Love, without denoting identification with a specific creed or gender. What counts is the experience of God, rather than the term we employ. Hence if the term God causes grievances, please feel free to substitute it with another word. Yet be aware that any deep spiritual work will however confront us with all grievances we hold towards the term God with the aim of healing them.

The Holy Week can be a most extraordinary healing time. Like other major religious events, it is powerful because it connects personal with collective or mythic history. This is the first stride on the way of healing since human sufferance and problems are basically due to individualism and separation from collective awareness.

Individualism leads to a perception devoid of any relationship with the web of life. What collective consciousness teaches, for example, is that if I feel very sad, it is not because there is something wrong with me or because someone has treated me badly. I am simply experiencing a collective force that expresses through sadness. The problem about sadness, or other emotions, is not about their content, it is about the judgment and interpretation we ascribe to them. Sadness, or any other emotion, can reveal its gifts once we accept that it plays a function in the web of life and see it in a wider context, where instead of being isolated we are sharing that same emotion with all mankind. ImageI

Here further empowerment follows, and this is the second giant stride on the healing path, when we decide to direct our emotions and feelings towards the highest good, when we accept the state we are in, and yet firmly resolve to let it go, offering it as fertiliser aimed at fortifying what we deeply love, which is ultimately a communion with God, or All That Is.

The palm branch is an ancient tool of royalty employed to welcome kings. This glorious reception, followed a few days later by Jesus’ execution, shows how the level of popularity can often change dramatically in ordinary reality.

On Holy Monday, Jesus cleared the temple, overturning the tables of the merchants, driving out those who were buying and selling there.

On Holy Tuesday Jesus addressed his disciples on the Mount of Olives.

Holy Wednesday, also called Spy Wednesday, is the day attributed to Judas Iscariot's agreement to show his enemies where they could capture Jesus.

Maundy Thursday is associated with the Last Supper, Jesus’ Agony in the Garden, and his arrest. Maundy derives from the Latin mandatum (commandment). At the Last Supper, Jesus gave the commandment, "Love one another as I have loved you." Hence, Maundy Thursday is traditionally celebrated as the day of brotherly love. It is also the day when the sacrament of the Eucharist was manifested.

The Eucharist is derived from ancient rituals representing the mystical marriage in the Western Mystery traditions. In the Greek Mysteries celebrated at Eleusis, Demeter was associated with bread and Dionysus with wine, just as the early Christians represented bread by Mary and wine with Jesus. In most Christian Churches, the Eucharist is the core sacrament.

On the night before his crucifixion, Jesus presented his apostles with bread and wine: “This is my body” and “This cup ... is the new covenant in my blood” (Luke 22:19-20). Bread and wine are sacred tools signifying Christ’s body and blood, the equivalent of shamanic spirit medicines.

The Eucharist is a foremost example of a shamanic incorporation ritual, unveiling the mystery of transmutation and shape-shifting. In ancient times it was preceded by many hours of ecstatic trance dances aimed at promoting release and communion with God, as well as harmony between Higher (Father) and Lower (Holy Spirit) through the mediation of the Middle (Son).

If we consider the 12 apostles as emblems of the 12 zodiac signs, the Eucharist also represents the full retrieval of the 12 fragmented parts and their final connection with the Centre.

Good Friday is the day of Jesus’ crucifixion, with the term “Good” being a bit baffling. According to Gnostic teachings Jesus appeared to John, the Beloved disciple, and laughed at the dismal scene of his crucifixion, unveiling the nature of his mystery. Jesus then told the disciples to dance, saying, "He who dance not, know not what is taking place." (The Acts of John: 94)

Holy Saturday marks the completion of the Holy Week as well as of the 40-day season of Lent. It is the period between the crucifixion and the resurrection, the time when Jesus travels in the Lower World, establishing a bridge with the Middle World where he will return on Easter with the Resurrection and the Higher World, where he will definitely move 40 days later with the Ascension.

Easter is the most important feast (festum festorum) of Christianity and also its greatest mystery, as well as the mystery of all preceding spiritual traditions. Observing Easter is a way of expanding our awareness into the deepest meaning of life, awakening the confidence that Love is bound to prevail and that Joy is eventually everlasting.