The Exalted Earth (by Franco Santoro) 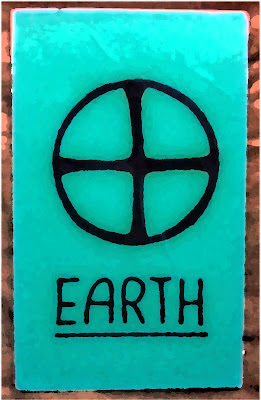 According to classical astrology Venus rules the sign of Taurus, as well as Libra. At an esoteric level Taurus is ruled by the alleged planet Vulcan, which is supposed to be situated between Mercury and the Sun.

Vulcan, or Hephaestus, was the husband of Venus (Aphrodite) and a shaman god specialised in creating sacred tools of metal and gems for the Olympian gods. His workshops were underground in places such as Lemnos and Mount Etna.

Vulcan is considered by many esoteric astrologers to be the most powerful planet of the solar system, which may explain why it has yet to be discovered. It is associated with the power at the core of the Sun that connects our central star with the centre of the universe. It is also connected with certain non-ordinary features of our planet, which include sacred sites, power points, magnetic grids, Provisional Territorial Units, underground civilisations and centres.

From an astroshamanic perspective Taurus is associated with planet Earth. Earth is seldom considered astrologically, for it corresponds to the point of the observer. In order to spot the Earth on the chart, one has to take a heliocentric perspective and, in this instance, this planet is directly opposite the Sun.

Astroshamanically the position of the Earth gives information about the way in which the intent can be expressed or grounded on this planet and also provides indications on what the Earth is asking you to do or be. Yet, in this context, it is important to point out what it is truly meant by Earth, which is not the ordinary notion of our planet.


The general human understanding of the world merely relates to its surface, whereas from a shamanic perspective there are three worlds. Besides the world of the surface of this planet, which represents the ordinary separated setting where we perceive ourselves living, there are two other worlds.


With these worlds we have never truly established any connection, apart from some sporadic unofficial attempts by shamans and alike. One of these worlds is the one strategically existing inside the Earth (Lower World), whereas the other is the unseen world that strategically abides around the surface of the Earth, which is also the linking agent with extraterrestrial worlds or parallel Earths.

There is an ordinary geography of the Earth, which is concerned with the  capricious formulation of our physical and administrative consensus reality, and there is a non-ordinary, or multidimensional geography, which includes the parts of the Earth from which consensus reality has separated itself.

Hence when we use the term Earth, it is important to be aware that there is a separated Earth and a multidimensional Earth. Perception changes dramatically according to which Earth we refer to.

Events and issues which are considered as catastrophic and excruciating from a separated Earth perspective are often major blessings in a multidimensional context.

The consensus reality Earth, which in astroshamanism we call Human Arbitrary Configuration (HAC), is a microreality based on separation from a wider multidimensional Earth reality.

The level of hallucination prevailing in ordinary Earth hampers the awareness of alternative realities. However, these realities are always present and at work.

Although most human beings have always remained confined in consensus reality, some special people in different ages and cultures have had contacts with the multidimensional Earth.

As from 2012 human beings may become increasingly aware of alternative configurations existing on and within the Earth. In these years some folks will face opportunities to release the captivity of the human separated paradigm and expand beyond our geography of isolation. This is part of a healing process of physical restructuring, which is promoted by the connection between our separated identity and the Core Multidimensional Identity.

This process is aimed at bringing about a consciousness which will be progressively less dependent on ordinary people, features and dynamics, while stimulating the emergence of a vaster healing reality and network. In order to support this development some people may embrace new activities and enterprises, finally responding to their authentic calling.