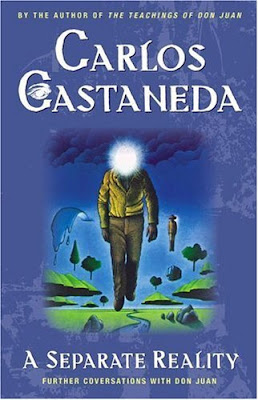 Carlos Castaneda: was born in on , with Sun and Jupiter in Capricorn, Moon and Ascendant in Taurus (10.2.2), and Jupiter exactly conjunct to the Midheaven. For Castaneda's birth chart click here.

This is a most earthy and solid astrological make-up, which explains Castaneda’s pragmatic attitude towards shamanic work, his dislike for the term “spiritual”.
This astounding capacity is also proved by the superlative success of his books (selling more than 8 millions copies and translated in 17 languages) and tools.

Castaneda is one of the major champions in bridging the multidimensional and the ordinary reality, or, in Castaneda’s terms, nagual and tonal.

In his work he describes one’s own initiatory training with a Yaqui shaman named Don Juan.

Castaneda kept himself out of the public eye and it is not clear whether or not his books are documented fact or entirely fiction.

For Castaneda, the primary goal is the continuation of awareness after physical death, which requires discipline and procedures representing the way of the Warrior.

His practices are aimed at maximising personal power, avoiding waste of energy (impeccability) and mastering awareness through the operative use of the assemblage point.

According to Castaneda humans are glowing cocoons of awareness set in a universe described euphemistically as all-pervading filaments of light. Such cocoons are intersected throughout by these filaments, producing perception, but they filter our perceptions by concentrating on only a small bundle.

Typical of Carlos Castaneda's work is also the emphasis on the power of Intention.

This Intent has nothing to do with struggling to achieve objectives and desires in the physical reality, as we humanly perceive it. Goals, purposes, manifestation, or self-assertion, as they apply in everyday life, are merely pale shadows of the Intent. This does not abide in our conditioned awareness of the world and is entirely unrelated to our identification with the body, as we see it.

The Intent is a pure energy wave flowing through the empty spaces left vacant by our ordinary sensory perception. It is far beyond the world we purport to know, existing in an unseen realm, which is completely alien to our cognition, and yet paradoxically it is the matrix that produces every aspect of our life.

The unveiling of this Intent requires an enormous investment of energy, an unattainable task as long as we keep using energy to sustain our conditioned perception of reality. When all our energy goes into supporting our separate identity, and its sense of self-importance, there is no space for anything else.

Self-importance was regarded by Don Juan Matus as the supreme enemy of the shaman and the nemesis of mankind. This is evident in the unceasing concern for the way we present ourselves to the world, the focus on being liked by people, the desire to be acknowledged, which also compels us to invest massive energy in the acknowledgement of others, so that they can then acknowledge us.

Don Juan argued that if we were capable of letting go of some of that preoccupation with self-acknowledgment, “two extraordinary things would happen to us. One, we would free our energy from trying to maintain the illusory idea of our grandeur; and, two, we would provide ourselves with enough energy to enter into the second attention to catch a glimpse of the actual grandeur of the universe.” (Carlos Castaneda, The Art of Dreaming, p.37).

One of Castaneda’s final tools is Tensegrity, a series of meditative stretching and posing ttechniques. These tools, together with most of Castaneda’s ideas and views have caused major disputes and controversies.

Some quotes from Carlos Castaneda:

A man of knowledge lives by acting, not by thinking about acting.

A path without a heart is never enjoyable. On the other hand, a path with heart is easy— it does not make a warrior work at liking it; it makes for a joyful journey; as long as a man follows it, he is one with it.

A warrior acts as if he knows what he is doing, when in effect he knows nothing.

A warrior considers himself already dead, so there is nothing to lose. The worst has already happened to him, therefore he’s clear and calm; judging him by his acts or by his words, one would never suspect that he has witnessed everything.

A warrior doesn’t know remorse for anything he has done, because to isolate one’s acts as being mean, or ugly, or evil is to place an unwarranted importance on the self.

A warrior is a hunter. He calculates everything. That’s control. Once his calculations are over, he acts. He lets go. That’s abandon. A warrior is not a leaf at the mercy of the wind. No one can push him; no one can make him do things against himself or against his better judgment. A warrior is tuned to survive, and he survives in the best of all possible fashions.

A warrior must cultivate the feeling that he has everything needed for the extravagant journey that is his life. What counts for a warrior is being alive. Life in itself is sufficient, self-explanatory and complete. Therefore, one may say without being presumptuous that the experience of experiences is being alive.

A warrior must learn to make every act count, since he is going to be here in this world for only a short while, in fact, too short for witnessing all the marvels of it.

A warrior thinks of death when things become unclear. The idea of death is the only thing that tempers our spirit.

An average man is too concerned with liking people or with being liked himself. A warrior likes, that’s all. He likes whatever or whomever he wants, for the hell of it.

Anything is one of a million paths. Therefore, a warrior must always keep in mind that a path is only a path; if he feels that he should not follow it, he must not stay with it under any conditions. His decision to keep on that path or to leave it must be free of fear or ambition. He must look at every path closely and deliberately. There is a question that a warrior has to ask: 'Does this path have a heart?'

Personal history must be constantly renewed by telling parents, relatives, and friends everything one does. On the other hand, for the warrior who has no personal history, no explanations are needed; nobody is angry or disillusioned with his acts. And above all, no one pins him down with their thoughts and their expectations.

The most effective way to live is as a warrior. A warrior may worry and think before making any decision, but once he makes it, he goes his way, free from worries or thoughts; there will be a million other decisions still awaiting him. That’s the warrior’s way.

Whenever a warrior decides to do something, he must go all the way, but he must take responsibility for what he does. No matter what he does, he must know first why he is doing it, and then he must proceed with his actions without having doubts or remorse about them.

An immortal being has all the time in the world for doubts and bewilderment and fears. A warrior, on the other hand, cannot…because he knows for a fact that the totality of himself has but a little time on this earth.