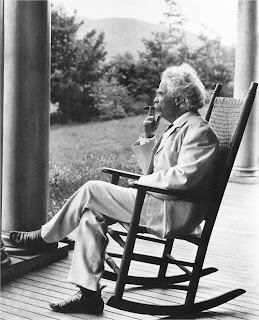 Mark Twain: born on with Sun in Sagittarius, Moon in Aries and Ascendant in Scorpio.

Samuel Langhorne Clemens, better known as Mark Twain, was probably the most popular American celebrity of his time and a major juggler between ordinary and non-ordinary reality.

In addition to Mark Twain, Clemens also used the pseudonym "Sieur Louis de Conte" or no name at all, leaving a veil of mystery regarding the paternity of some of his works.

He is the author of the The Adventures of Tom Sawyer, The Prince and the Pauper, A Connecticut Yankee in King Arthur's Court and the non-fictional Life on the Mississippi.

Many of his works were rather controversal and didn’t make it through the ordinary reality, being suppressed or delayed for various reasons.

The level of ordinary and non-ordinary interference in his life was such that his obituary was published erroneously in the New York Journal, to which Twain famously responded: "The reports of my death are greatly exaggerated".

Many a small thing has been made large by the right kind of advertising.

The only reason why God created man is because he was disappointed with the monkey.

Drawing on my fine command of language, I said nothing.

It is better to keep your mouth shut and appear stupid than to open it and remove all doubt.

All you need in this life is ignorance and confidence; then success is sure.

Sometimes I wonder whether the world is being run by smart people who are putting us on, or by imbeciles who really mean it.

Click here for our calendar of holistic and astroshamanic events.
For individual consultations with Franco Santoro and Associates click here
If this is feasible for you, please support our blog with a donation. Every donation of any amount is most welcomed. Also very small contributions are most appreciated.