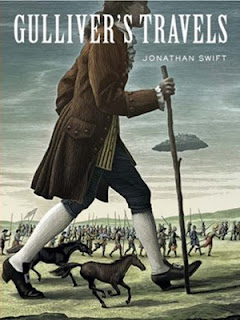 Jonathan Swift: born in on with Sun in Sagittarius, Moon in Libra and Ascendant in Aquarius (9.7.11), and Neptiune Instrument ( conjunct Ascendant)

Swift is best known for his Gulliver’s Travels, the account of a multi-dimensional voyage into other realms, originally titled Travels into Several Remote Nations of the World.

A less known work is A Tale of a Tub, which is the story of three sons - representing a trinity of Catholic, Protestant and Dissenter – who misread the text of their father’s last will (Bible) so as to in order to sabotage the original purpose of a coat (religion) left to them by their father (God). The story is repeatedly interrupted by the Hack, the alleged author of the story itself.

Swift also coined the term Yahoo, which appears repeatedly in Gulliver’s Travels to indicate a degraded human being.

A major feature in Swift’s works is the relevant attention given to excrements, compost and whatever is filthy or degraded. In Gulliver's Travels,

Swift offer regular details of evacuation practices in Lilliput and Brobdingnag, while in Lagado a member of the Academy claims to detect a man's involvement in plots against the government by examining the physical properties of his excrement:

"[b]ecause Men are never so serious, thoughtful, and intent, as when they are at Stool." Swift also wrote a large series of excremental poems, such as "Strephon and Chloe".

This is a couple forced on their nuptial night by the richness of the wedding to relieve themselves, bringing the purity of romantic love down to physiological reality:

In the poem “Cassinus and Peter”, Cassinus, passionately in love with Caelia, is unable to restrain his ardent curiosity and sneaks into Caelia's bedroom. He is cast into a black melancholy upon finding her chamber-pot. No longer interested in life after having unveiled "Caelia's foul Disgrace," he explains to a friend (Peter) his emotional dismay and descent “from deification to defecation,” by saying:

Click here for our calendar of holistic and astroshamanic events.
For individual consultations with Franco Santoro and Associates click here
If this is feasible for you, please support our blog with a donation. Every donation of any amount is most welcomed. Also very small contributions are most appreciated.