The Hermit - Virgo: An Astroshamanic Voyage into the Tarot (by Franco Santoro) 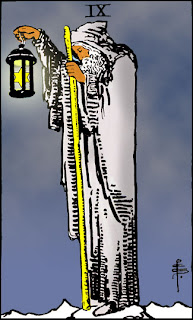 For the introductory article to this series please click here.
This introductory voyage through the Major Arcana reaches The Hermit, which according to the esoteric system of the Golden Dawn is associated with the sign of Virgo.
The image of the wise Hermit has always played a major role in popular imagination. The withdrawal from ordinary life and the focus on the quest for truth were highly appreciated in ancient times, especially because they often involved saintly qualities and an attitude of devoted service towards those who had not “withdrawn”.
In Robert Places’ Tarot of the Saints, the Hermit is represented by Saint Anthony the Great, who is traditionally depicted holding a small bell, with a pig at his side and carrying a T-shaped cross. Similarly to St. Francis he was moved by the Gospel of Mark’s message, “Go, sell what you have, and give it to the poor”, which is what he actually did. Yet, unlike St. Francis, Anthony spent most of his life in solitary asceticism and prayer. His example and miraculous powers drew nevertheless many people for healing and spiritual guidance.
In most tarot decks, including the Rider Waite Tarot, this trump portrays an old man covered with a monk robe and cloak, standing alone with snow at his feet on a high peak, holding a lantern with a 6-pointed star in his right hand, associated with the hexagram of the Seal of Solomon, or the Shatkona (representing Divine Union and merging of polarities), and a wooden staff in his left. The right hand is traditionally related with the conscious intention, which is here associated with light, wisdom (the lantern) and the capacity to unite the opposites (the Seal), while the left hand represents what is released, i.e. mundane power and the patriarchal path (the staff).
Similarly to Gandalf in The Hobbit and The Lord of the Rings, the Hermit, besides holding a staff, also wears a grey robe, representing the Middle World and the integration of the opposite polarities of White (Higher World) and Black (Lower World). Yet, unlike Gandalf or similar wizards, the Hermit is not associated with spectacular use of supernatural powers or overt wrestles with dark forces, although the fight takes place at an inner and spiritual level, as with the spiritual combat or warfare against the demons typical of St Anthony.
Through silence, stillness, contemplation and humbleness he moves beyond the conflict between polarities, reaching a pinnacle of initiatory wisdom, which he effortlessly, perhaps inadvertently, shares with those who struggle in the mist of ignorance and illusion.

From the mountaintop he looks down, holding the lantern so as to illuminate the path for the seekers who are climbing and can easily get lost. He is compassionate, protective and caring, yet he is not available to descend to, or compromise with, those who call for support from the lower levels and are not willing to ascend. His function is to stand as a luminous signpost, so that the peak can be visible at all times for whoever is ready to go for it.
The Hermit functions as an inner lighthouse, representing the part within us which can disconnect from the emotional and mental mess of separated reality, so as to get in touch with our true Intention and original wisdom. 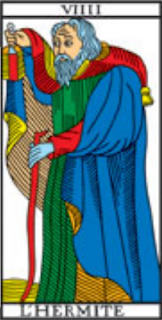 His presence emerges whenever we have gone astray and are open to find our true bearing, when we choose to withdraw from the distractions of the outer world, focusing inwardly and embracing a solitary quest for truth. He shines his light from within, providing a luminous guidance and directing our steps on the path we need to go to fulfil our highest potentials.
When the Hermit’s lantern strikes in our life, this is a sign that we need to release our involvement with the busy activities of the world and take some quiet time alone. There is a vital urge to question how we have lived so far, ceasing to move around like robots and taking responsibility for facing our inner source.

Meditation, silence, contemplation, aloneness and any form of spiritual retreat may play a major role at this stage. These may be the result of a voluntary choice or be brought up unconsciously by the soul through illness, imprisonment or other forms of isolation or solitude.
Solitude is indeed the key element for the Hermit, and the first association most people get when they hear this term, which also causes a wide range of reactions. Yet, as Osho would put it, the Hermit is alone and not lonely.

“There is a tremendous difference between loneliness and aloneness. When you are lonely you are thinking of the other, you are missing the other. Loneliness is a negative state. You are feeling that it would have been better if the other were there - your friend, your wife, your mother, your beloved, your husband. It would have been good if the other were there, but the other is not. Loneliness is absence of the other. Aloneness is the presence of oneself. Aloneness is very positive. It is a presence, overflowing presence. You are so full of presence that you can fill the whole universe with your presence and there is no need for anybody.” (Osho, The Discipline of Transcendence, Volume 1 Chapter 2)
The Hermit confronts you with the awareness that your true goals have nothing to do with what is advertised in consensus reality, that there is a deeper realm shunned by the outer world and which is your task to explore, even if this means doing so alone. All ordinary ambitions and comforts lose their arrogant pull, while the desire for truth reigns supreme as the sole requirement that can warm your soul.

The first step is to meet the Hermit and acknowledge aloneness. Aloneness (all-oneness) is our authentic nature. We are always alone. We came into this planet alone and we will leave alone. And also during our whole staying in this world we continue to be alone, although we may forget about it or pretend it is not the case. 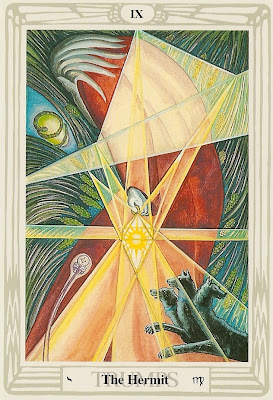 Only if the encounter with the Hermit is successful, will the seeker return and dispense his gifts to the outer world. Most of those who have contributed blessings and love to this planet have done so after spending long time in solitude.

As Osho says “real love is not an escape from loneliness, real love is an overflowing aloneness. One is so happy in being alone that one would like to share - happiness always wants to share. It is too much, it cannot be contained; like the flower cannot contain its fragrance, it has to be released." (Osho Talks on CD)
The Hermit is the key to true sacred relationships. Sacred relationships have nothing to do with the conventional idea of soulmates, or other concepts such as twin flames, twin souls or rays. These relationships are based on the premise that someone is the other half of my soul and that I need him or her in order to be whole and feel complete. In a sacred relationship I am not half of an entirety with another, we are both a whole.
In a holy relationship, as A Course In Miracles puts it: “Each one has looked within and seen no lack. Accepting his completion, he would extend it by joining with another, whole as himself. He sees no difference between these selves, for differences are only of the body. Therefore, he looks on nothing he would take. He denies not his own reality because it is the truth.” (ACIM, T22:Introduction 3:2-6).
The Hermit and Virgo mark an intense process of transformation aimed at providing the tools that can allow the soul to move from the painful arena of separated or special relationship to the realm of true relationships.
This trump indicates a time of transition, which may lead to a radical shift in one’s life, a sense of rebirth and reawakening to one’s authentic path. This is promoted through deep spiritual inner work, meditation and shamanic practice, yet by also withdrawing in retreat places in nature, aligning with the rhythms of the earth and cultivating silence.

The withdrawal from social interactions, mundane concerns and activities is meant to change the focus from outer to inner, from ordinary life to reality, so that the primary relationship at work abides with the Core Multidimensional Identity, our true Self, and… God
“Man's loneliness is, in fact, the loneliness of God. This is why it is such a great thing for a man to discover his solitude and learn to live in it. For there he finds that he and God are one: that God is aloneness as he himself is alone. That God wills to be alone in man.” (Thomas Merton)
For the introductory article to this series please click here.

For a selection of books on the tarot, please click here.
If this is feasible for you, please support our blog with a donation. Every donation of any amount is most welcomed. Also very small contributions are most appreciated