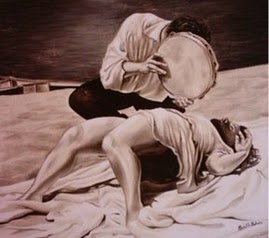 The Sanskrit word Tantra  means "web", an unbroken continuity, the connectioin between whoever and whatever exists. Tantra comprises various ideas and ritual practices characterized by the use of the ordinary and physical to access the non-ordinary and multidimensional, connecting the microcosm with the macrocosm.

Tantra is an anagram of tarant and tartan.

Tarant  refers to Tarantism, a form of envenomation caused by the bite of a kind of wolf spider called tarantula, which engaged its victims in frenzied and ecstatic dances. A particular Southern Italian dance, called the tarantella, and its related music, was considered as the only cure for this condition. This was a strategic means of deceit aimed at evading the ban against trance dances and Bacchanalian rites, leading to an ecstatic connection with the web of life.


This practice ritually opens up to the cathartic expression of the Sun and Moon polarities, with the aim of accessing the mysteries that exist beyond the realm of conflict and duality. Tarantella is a significant example of cultural and religious shape-shifting of traditions dating back to most ancient times. Similar dancing practices have managed to survive in most parts of the planet, mainly thanks to the capacity to hide their original motivation and compromise with incompatible local and contemporary belief-systems.

Tarantella dances are used regularly in astroshamanic dance workshops, for promoting release from blocks and the healing of deep emotional wounds, as well as for unveiling hidden potentials by entering into expanded states of consciousness and grounding them in everyday reality.

Please find below an example of contemporary Tarantella dance (Pizzica)

The Tartan  is a web pattern consisting of criss-crossed horizontal and vertical bands in various colours.  The tartan is currently associated with Scotland, though it is common to many Indo-European cultures and its earliest evidence dates back to 400 BC.
AstroshamanicHealing® Touch and Primal Embrace is an astroshamanic application of tantra, employing elements of tarant music and dance, with workshops taking place primarily in the country of the tartan.