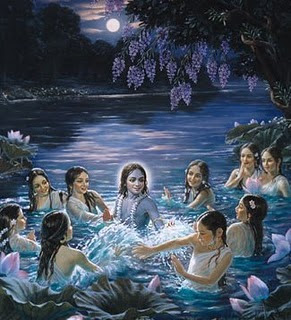 Full Moon in Leo:  This is traditionally a most visionary and theatrical Full Moon, the radiant bearer of spectacular breakthrough and inventive ideas.

The Full Moon is exact on Tuesday 7 February 2012 at 21:53 GMT in 18° Leo 32’, so that the previous night will express most of its potential. The effects, as for all full moons, will begin two days before and end two days after.

The two days preceding a full moon can challenge the perspective of ordinary reality and are ideal to release pent-up emotions and excess energies. The function here is to bring balance between the areas where the Sun and the Moon are. With the Aquarius-Leo axis, the integration is between group and individual consciousness.

During a Full Moon the sexual energy reaches its climax, making the whole body a vast erogenous zone eager to express and act out. This is one of the reasons why the Full Moon has always been regarded as the best time for dynamic group rituals and trance dances.

The Full Moon is a vibrant and stimulating time, revealing the hidden mechanics of the interaction between polarities. The lunar cycle, which started with the New Moon on 23 January (click here for details), reaches the culmination with the Full Moon.


The sign where the Moon was placed at New Moon, which in this case is Aquarius, defines the basic Intent. Hence, this current lunar cycle based on Aquarius, features themes such as: freedom, independence, community, synergy, inventiveness, deep friendship and companionship.


This Full Moon is ideal for:
On a Full Moon whatever was conceived during the New Moon, requires direct disclosure and achievement. Here you confront the practical implications of any Intent you set at the beginning of the lunation cycle.


The energy of Aquarius and Leo combined in this Full Moon shed light onto the awareness of our global consciousness and on how my identity and gifts fit with the wider context. The focus is on bridging the collective with the individual, together with the generous search for the fragmented parts of my extended nature.


This Full Moon stirs up the quest, the pull to release what is familiar and to explore long forgotten and out of bound territories, triggering a multidimensional shift of perspective that brings genuine change. It implies letting go of the safety of our home environment and setting off on a novel journey. It also entails the availability to return and share the wisdom acquired during the quest, devoting time to integrate the new with the old, supporting healing and reconciliation.

The energy of the Full Moon inescapably confronts with the realm of relationships and whatever is unconscious in that sphere. Here again the challenge is that relationships are unavoidable, no matter whether according to ordinary reality I am in a relationship or not.


In this context, “wanting to be in a relationship” is an absurd Intention, for we are all constantly involved in relationships, whether we are aware of it or not. What truly counts is to gain awareness regarding the nature of such relationships and making the best out of them.


If I acknowledge the relationships I am already in and consciously decide to heal and work with them, new relationships can develop and old ones can transform themselves and become new relationships. The Full Moon in Leo aligns with a paradigm shift that potentially allows me to perceive and experience what is happening beyond the veils of ordinary perception.The Opening picture of this article depicts Krishna bathing in the Yamuna on a full-moon night with Radha and the eight Gopis.

Recommended books on the Moon's Cycle:

Binary Vision:
For each Sun/Moon combination (astroshamanic binary) several visions have been received by astroshamanic seekers. These visions refer to the Epic of the Sacred Cone, a provisional collection of documents, which constitute the strategic mythic reference of the astroshamanic cosmology and lineage. Click here for a simplified compendium of the Epic. We provide below one of the visions received on the Full Moon in Leo and the binary 11.5 (Sun in Aquarius, Moon in Leo). Each binary vision is accompanied by a healing seal (see image on the left).
I travel to a very high location. From there I can see myself and all my connections in  my local environment, then spreading to the whole country, planet, galaxy, universe, Handor and Rodnah. The amount of energy available is incredible. My Intent is to take all this energy and channel it through the Portal of the Sacred Cone. This is the Function. All I see and feel is part of a greater scheme. I’m operating as part of this Game. I acknowledge this connection and implement it. It is a triumph of synergy. This is the way. 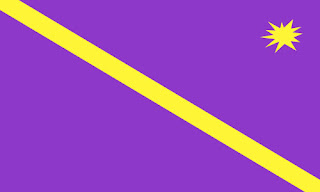 The Yukal Nation of Lhanne (Hanne in previous versions) is a multidimensional island situated in the central archipelago of Yukal. It consists of the main , the island region of Largyane, and two reserve base smaller islands (Yuj and Yun) under a joined jurisdiction with the Handorian Defense System.
The capital is Han City, one of the most astounding cities of the Handorian States System, whose motto is "You can dive in Han!". Of particular relevance is the Hannarena, a major multidimensional theatre and Sacred Cone Game stadium.
Lhanne contributed major resources during the pristine developments of the Epic of the Sacred Cone with particular reference to its precious organic quartz. Lhanne, and in particular Han City is one of the major marketplaces for living crystals. The main square in Han City is the Lhanne Trinity Circle, a vast space consisting of three consecutive circles, of 12, 144 and 1728 units, each characterised by a large crystal and precious stone, undoubtedly the most luxurious and extravagant site in the State of Yukal.
Lhanne also hosts some of the main Handorian Squads, together with the Eleventh Contingent of the Handorian Interspace Delegate System.
The Sacred Cone and Provisional Delegate Bureau reference in Lhanne is the Provisional Commissioner based in  . 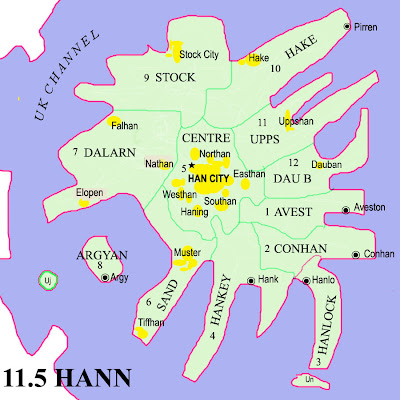 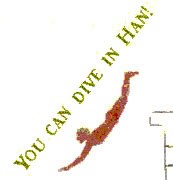