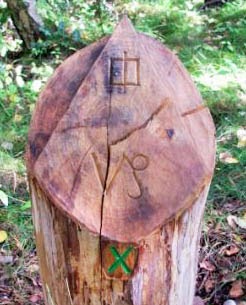 The sign Capricorn is rather controversial and complex as it represents the doorway into spirit and the relinquishment of the separate illusion of duality. The Tibetan Master, Djwhal Khul, considers it as the most mysterious of the twelve and a very difficult one to define. “Even the symbol of the sign has never been correctly drawn, we are told, because its correct delineation would produce an inflow of force that would be undesirable; also this symbol is sometimes called the <signature of God>“. At first sight the glyph suggests the form of a leaping mountain goat and the typical tortuousness of the sign. Such arcane nature makes Capricorn susceptible of major projections and misunderstandings, so that it is often seen as scapegoat and also as one of the less popular sign of the Zodiac (together with Virgo and Scorpio).

The seasonal period of Capricorn coincides with the arrival of the winter sleep and the quietness that facilitates inner work and planning for the next seasons to come. It is the phase when trees are like skeletons and the Earth appears naked, although in its depth the seeds are at work aiming at a remote as well as certain goal. From a spiritual perspective this is indeed the time of the highest flowering as the seeds of Aries reach here the end of their nine months’ labour.

This sign starts with the winter solstice, also called Sol Invictus and the Gate of Heaven. According to some esoteric traditions there are two major gates: the Gate of Cancer (gate of men), which leads into the physical dimension of separation and illusory perceptions of this planet, and the Gate of Capricorn (gate of heaven), the one leading to the spiritual kingdom of unity. This can be passed once the identification with the ego personality is over.

It is during the darkest moment of life that enlightening experiences can take place as well as the possibility to move to another level. Summer is apparently the most abundant, luminous and happy time of the year. Actually this is only what the physical body perceives. Winter is a time of coldness, darkness, introversion, withdrawal. Physical energy is at its lowest and this weakens the ego which thrives on the available exuberance of matter. It is in this context that spiritual energy may easily reach its peak.

It is part of the awareness of many esoteric traditions that darkness, depression, grievances and fear heralds the arrival of light, love and joy. When the Sun enters Capricorn it reaches its lower position in the northern hemisphere horizon, the Winter Solstice, and this also starts the solar cycle of ascension.

If this is feasible for you, please support our healing work with a donation. Every donation of any amount is most welcomed. Also small contributions are warmly appreciated

Share on Facebook
© Franco Santoro, info@astroshamanism.org. All rights reserved.
Image: Mosaic in the Beth Alpha synagogue, with the sun in the centre, surrounded by the twelve zodiac constellations.