Death - Scorpio: An Astroshamanic Voyage into the Tarot (by Franco Santoro) 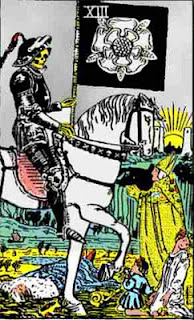 “We are all dead men on leave.” (Eugene Levine)
For the introductory article to this series please click here.


This introductory voyage through the Major Arcana reaches Death, which according to the esoteric system of the Golden Dawnis associated with the sign of Scorpio.

The sign of Scorpio is traditionally associated with Death, the thirteenth Major Arcana in the Rider Waite Tarot and most decks. The card depicts a skeletal, grim reaper figure wearing a full black suit of armour and riding a white horse, similarly to Revelation 6:8 “And I looked, and behold a pale horse: and his name that sat on him was Death, and Hell followed with him. And power was given unto them over the fourth part of the earth, to kill with sword, and with hunger, and with death, and with the beasts of the earth.”

The skeletal appears to ride slowly, bearing a black banner with a mystic rose, symbol of life, and stepping over the body of a king, while a child and a maiden fall before the horse, and a bishop stands and awaits his end with clasped hands. Despite their diversity all human beings are here united by a common fate of death, which is a theme, known as the Dance of Death, graphically depicted in many initiatory medieval churches, such as Rosslyn Chapel, in which death was shown equally triumphing over individuals of every class and age. The sun rises in the background of the card between two pillars, which is also a feature of the following card, the Temperance.


Death, together with sex and other Scorpio topics, is definitely the most misunderstood of all experiences.[i] It is also the most significant element of any shamanic initiatory processes. Despite the abundant flowering of courses and training on shamanism, the crucial and sine qua non teaching in this realm develops solely through the direct connection with Spirit, which is usually brought about by a confrontation with death through severe illness or other life threatening situations.

These experiences work as initiatory tests, massive release processes, which can also be ongoing and occur throughout the shaman’s life. When the apprentice manages to survive such ordeals, the next step involves being trained by Spirit directly. Yet, there is no way this can occur unless the trainees accept to die to their previous identity and fully face the archetype of Death. This leaves such individuals with an exclusive mark, which can be perceived and understood by kindred souls, although it generally causes fear and other unfavourable reactions on ordinary folks. 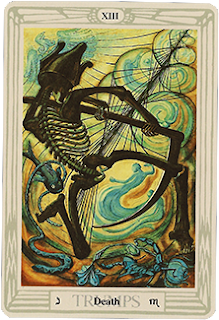 The ordinary world and all realities ruled by the ego hate death since it marks the annihilation of all their forlorn dreams. Death and illness can be painful, yet, as Alan Watts writes “what makes them problematic is that they are shameful to the ego. This is the same shame that we feel when caught out of role, as when a bishop is discovered picking his nose or a policeman weeping. For the ego is the role, the ‘act’, that one’s inmost self is permanent, that it is in control of the organism, and that while it ‘has’ experiences it is not involved in them. Pain and death expose this pretense, and this is why suffering is almost always attended by a feeling of guilt, a feeling that is all the more difficult to explain when the pretense is unconscious. Hence the obscure but powerful feeling that one ought not to suffer or die…”[ii]

Death, which is also linked with number 13 and the related Triskaidekaphobia, is often perceived as a most terrifying card. Yet this is only so when we abide by an illusory perception of reality based on denial and ego conditioning.

Death is part of a major natural process cyclically manifesting in all aspects of life, and bringing about transformation, renewal and healing. The Death card simply heralds this. It may mark a time for something to be completed, which also includes the emergence of new things to begin. This reminds me of Mike Scott’s song traditionally played at the end of the Findhorn Foundation Experience Week, which says “this is not the end, it is just the start.”

The Death card announces an imminent radical clearing out, the conclusion of a routine or familiar mode. Rather than the process of transformation itself, this trump indicates the exact moment when we release old patterns and open up to transformation. This can be apparently harsh or devoid of any plea, yet it is often a blessing in disguise, capable of bringing about a major transformation in life, a luminous rebirth that the subject would have never experienced without the intervention of a drastic situation. 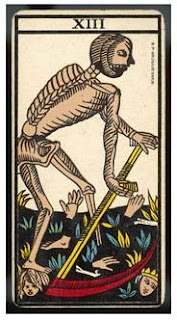 The white rose on the banner is a representation of rebirth and is there to honour the act of letting go, release, forgiveness. This card provides major support in dissipating any harmful or predatory force which blocks the advancement of the soul on her luminous journey. It is a card of trust since it involves surrendering to a major change and apparent loss, while confiding in a greater good that will come as a result.

Meditation and shamanic journeying on Death can allow us to gain more awareness on the above, intensifying the healing of the release process and getting us ready to welcome the gifts that will follow.

“The shaman in you lives daily with the sense of death, while the rest of you fight the depressing thought that life will soon be over. I think it is as the shamans say: Only the sense of imminent death shakes you loose from your momentary attachments and fears, from your interest in the programs you have set up. And so the sorcerer welcomes death as the end to a lifestyle that has long since run out of steam. The shaman finds transformation and ecstasy - not tragedy or failure - in death”.[iii]

Death challenges us to stop and expand our horizons. This is often brought about by times of adversity, when we are basically forced to break off certain mechanical patterns in life. The major focus in everyday life is on doing. We keep running around doing until we are forced to stop by illness or death. This is why for many people the only chance to stop doing and start being is when they are confronted with life-threatening situations. What is paradoxical here is that beyond the tragic and scaring ordinary perception of death, there is a space were things get much simpler and peaceful.

If we die or are faced with an imminent death all our responsibilities and obligation immediately fade away. We stop and focus on being, while the world continues to be busy doing. By taking time to die on purpose, while we are still living, we become more alive in the present. For example, you can try stopping right now, becoming aware of your breath, as if you were drawing your last breaths.

Taking regular time to meditate or shamanically journeying allows us learn the healing art of dying, to stop and connect with our multidimensional nature, which is indeed the only bit in us that can go trough death, that continue to live while everything else fades away. Hence Death always comes as a tester of our thoughts, emotions and intentions, since AFS Bogus says, “only the in the face of death does not sneak away, is a veracious one”.[iv]

[i] The quote in this note does not necessarily relate to the article, yet I believe it is ok, considering that only 1% of readers look at notes. "Death is one of the few things that can be done as easily as lying down. The difference between sex and death is that with death you can do it alone and no one is going to make fun of you." Woody Allen
[ii] Alan Watts, Psychotherapy East and West, Pantheon Books, 1961
[iii] Arnold Mindell, The Shaman’s Body: A New Shamanism for Transforming Health, Relationships, and the Community, Harper, San Francisco, 1993, p. 157
[iv] AFS Bogus, “Letter to Francesko Saint”, in Provordo Etnai Pratinindhe Pradhikara Archives, year 1986.