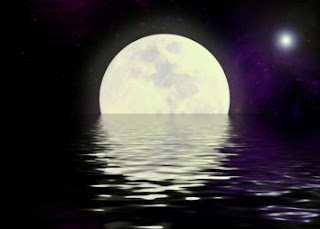 Today 19 March 2011 the Full Moon will reach its perigee transiting the Earth at the closest distance in 18 years (356577 kilometres away). As a result the Moon will appear larger and brighter than ordinary full moons.

This Supermoon, as it is called by some, causes more gravitational pull, with higher tides and increased lunar magnetic effects. Following the recent earthquakes and planetary upheavals, in the past days the web was crowded by apocalyptic warnings and conspiracy theories. In this respect please refer to the article “The Wave”.

Traditionally this Full Moon was called with a large variety of names, such as Snow Moon (for in certain zones it happens at a time when the heaviest snows fall), Hunger Moon (for the scarcity of food and provisions), Worm Moon (the ground tends to soften and earthworm casts reappear), Crow Moon (when the cawing of crows heralds the end of winter), Sap Moon (signalling the time of tapping maple trees), and Crust Moon (the snow becomes crusted from thawing by day and freezing at night).

The effects of any Full Moon are usually experienced during the two days before and after the exact time of the Full Moon. Since this is a Supermoon its effects may be much larger. The preceding days can challenge our conventional perspective and cause release of pent-up emotions or excess energies, while the following serve the purpose of integrating what has emerged during the climaxing time.

The general aim of the Full Moon is to bring balance between the areas where the Sun and Moon are transiting through a process that involves acknowledgment, tension, reconciliation and healing. With the dynamic Pisces-Virgo (the signs where the Sun and Moon respectively are), some examples of integration are those between collective and individual service, transcendence and manifestation, free intuition and sense of duty, surrender and dedication.

Pisces is the most mystical and boundless sign of the zodiac, surrendering to the flow of life, thriving in situations of paradoxes, confusion and bewilderment, while Virgo is technical, efficient, scrupulous, painstaking, systematic,  concerned with acknowledging, discriminating and preserving resources. Pisces is romantic, haphazard, irrational, indistinct, yet inspired and ecstatic, aligned with the visionary realm. Virgo is proficient, analytical, precise, sensible and selective, focused on the ordinary and mundane aspects of life.

The dialectic between Pisces and Virgo, being the last polar interaction of the winter season, carries the energetic climax of the entire annual cycle. This exemplifies the dynamic between the whore and the virgin, the shamanic witch and the pure mother, the Gnostic or Inner Mystery and the Christian Outer Mystery, the direct connection with Spirit and the adherence to the official interpretation of scriptures and religions.

During a Full Moon energy reaches a climax, making the entire body a vast vibrant zone eager to express and act out. This is one of the reasons why the Full Moon has always been regarded as the best time for dynamic group rituals and trance dances. The Full Moon is a pulsating and invigorating time, unveiling the arcane mechanics of the interaction between polarities.

The lunar cycle, started with the New Moon in Pisces (see article "New Moon in Pisces"), reaches the culmination with this Full Moon. The sign where the Moon was placed at New Moon, which in this case was Pisces, defines the basic intent. Hence, this current lunar cycle based on Pisces, features themes such as: compassion, service, unconditional love, surrender, magination, art, empathy, annihilation, transcendence and trance states.

On a Full Moon whatever was conceived during the New Moon (4 March 2011, at 20:45 GMT), calls for direct expression and achievement. Here we may confront ourselves with the pragmatic implications of our intent.

The exact position of the Sun (28° Pisces 48’) and Moon (28° Virgo 48’) at Full Moon in your astrological chart may indicate the nature of the Sun-Moon dynamics as they apply to your individual setting.

I conclude this note with some quotes from three celebrities born on a Full Moon with the Sun in Pisces and the Moon in Virgo, Roberto Assagioli,  Rudolf Steiner and Jack Kerouac.

There is no certainty; there is only adventure

The most important rule is to formulate, clearly and precisely, the goal to be reached, and then to retain it unswervingly in mind throughout all the stages of the execution, which are often long and complex.

Without forgiveness life is governed by... an endless cycle of resentment and retaliation. (Roberto Assagioli)

Great things are not accomplished by those who yield to trends and fads and popular opinion.

If moderation is a fault, then indifference is a crime. (Jack Kerouac)