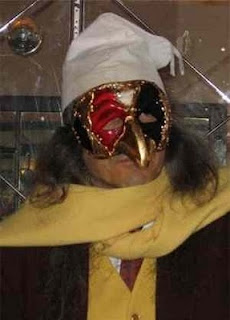 Mardi Gras (Fat Tuesday), also called Shrove Tuesday or Pancake Day is traditionally the last day for Catholics to indulge in excesses before Ash Wednesday, which starts the austere time of Lent.

Mardi Gras celebrations find their roots in ancient Pagan customs. It is believed that the period of Carnival, from Jeudi Gras to Mardi Gras, included the days added to the lunar calendar to allow it to coincide with the solar calendar. Since these were not part of the official calendar, it was possible to behave in a non-ordinary way during that time, disobeying ordinary rules and shifting social roles.

The places where Mardi Gras is more popular are Venice, New Orleans, Rio de Janeiro, Cologne, and many other locations in Europe, United States, Latin America, the Caribbean and … before long also Findhorn.

Carnival is associated with the month of February (from the Latin februa, “tools of purification”), which was a period of cleansing and purification, acted out through the provisional suspension of the social order.

During this time the reality was upside down and people could let go of their ordinary roles, taking on alternative identities and… body-swapping. It was a celebration of the mysteries of the multidimensional realms, with human beings shape-shifting into any form they liked and possibly entities from other worlds and times sliding into this earth and taking up human shapes.

Despite the separation from other dimensions and the loss of the capacity to shape-shift, which followed in more recent times, the original awareness is still currently preserved by the custom of wearing masks and costumes at Carnival.

Sacred Theatre is an act of service as old as humankind. It has found form and expression in every culture on our planet at one time or another. Its value lies in its ability to dynamically connect us to ourselves, each other, our community, our planet, the universe and, at times, to the divine and beyond. -- Sandra Lee Hughes http://masktheater.org/Sandra_Hughes.html

Click here for our complete calendar of holistic awareness and astroshamanic events.