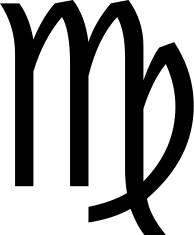 Virgo deals with the stage of selection and assimilation. It is a phase that requires an attentive work of discrimination between what is useful and what needs to be released. Discipline, an eye for flaws and the capacity to take things apart and reorder them in better shape are called for. Everything is carefully analysed, classified and allocated to its specific and best usage.

This involves filtering or storing the essence of every form and discarding the rest. Here it is essential to focus on the resources that are extracted rather than on the wastes that are expelled. Otherwise, waste material risks being held on to, blocking the process of assimilation and producing toxic effects.

It is a process of discrimination between wheat and chaff exemplified by the sieve, which is also the originator of most ancient western shamanic drums.

In the physical body the above function is played by the intestine, which is the principal portion of the alimentary canal, beginning at the mouth (Taurus) and ending at the anus (Scorpio). The intestine is part of the digestive tract and comprises the zone between the stomach (Cancer) and the anus (Scorpio). It is divided into two major sections: the small intestine, where most of the digestion takes place and food substances are absorbed; and the large intestine, where waste material is excreted. The intestine is the crucial zone where discrimination is at work in order to discern what is to be released as waste material and what is to be stored to become part of the body.

In traditional shamanism the intestine of animals, especially fish or whale, is often used by shamans as an initiatory first level training aimed at gaining knowledge and acquiring healing tools. Once the shaman has acquired experiential understanding of shamanic anatomy and body parts, she is ready to move to the second level, which involves direct interaction between body parts.

As Mircea Eliade describes, the shaman “descends into the belly of a giant or a monster to learn science, wisdom. It is for this reason that the shaman remains in the fish's belly for three years: to learn the secrets of Nature, to decipher the enigma of life, and to learn the future.”