Pentecost: Birth of a Holistic and Shamanic Church (by Franco Santoro) 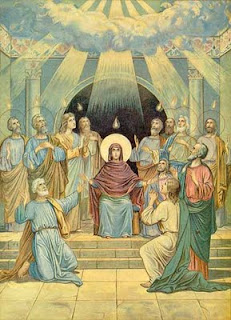 There are three major holidays in the Christian calendar.

Two of them (Christmas and Easter) are widely known to all people, Christians and non-Christians.

The third feast, Pentecost, officially taking place this year on 27 May, with the Sun in Gemini and the Moon in Leo, is more unfamiliar and even several believers do not know much about it.

Perhaps this is because, unlike the other festivities, it does not involve extra days of vacation, specific things to buy or culinary associations, such as Christmas pudding, turkey, Easter eggs and lamb.[i]

Yet, in actual fact, this feast does relate with food consumption, since it originally celebrates the Jewish fruition of the harvest. In Christian imagery it also refers to Jesus as “the first-fruits of all who have fallen asleep” (1 Corinthians 15:20) exemplified by “I am the bread of life. He who comes to me will never be hungry, he who believes in me will never thirst.” (John 6:35). This may sound like a catering slogan, yet it does not necessarily promote ordinary business and consumerism, which is perhaps why there is not much fuss about Pentecost.

Pentecost, also called Whitsunday (especially in Britain), is the 50th day after Easter, marking the anniversary of the Ten Commandments, and most of all, as for Christians, the descent of the Holy Spirit on the Apostles. On that occasion the disciples and the Virgin Mary “were meeting together in one place. Suddenly, there was a sound from heaven like the roaring of a mighty windstorm, and it filled the house where they were sitting. Then, what looked like flames or tongues of fire appeared and settled on each of them. And everyone present was filled with the Holy Spirit and began speaking in other languages, as the Holy Spirit gave them this ability.” (Acts 2:1-4).[ii]

Most Christians consider Pentecost as the official Birth of the Church. Before that event the followers of Jesus were scattered and unfocused, then after the descent of the Holy Spirit they got a lot of enthusiasm, came together and started to establish their practices and teachings. 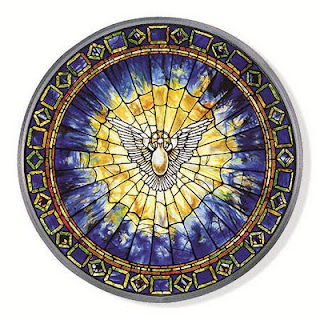 The Second Vatican Council describes the action of the Holy Spirit as “an interior, saving work which is also expressed externally in the birth of a community and institution of salvation… permeated with love, which overcomes all differences and divisions of an earthly nature… with an expression of faith in God which is understandable to all, despite the differences in language.”

The Church born at Pentecost, rather than a building or hierarchical organization, is the gathering of those who, filled with the Holy Spirit, have received the “gift of tongues”, so that when they speak everyone hear them in their native language. This gift establishes communication in the Spirit rather than in the language.

As Alan Watts puts it “when the mind is no longer spell-bound, the confusion of tongues gives place to the gift of tongues – the power to use the Word without being enthralled by it.” For this reason “Catholicism has always insisted that spiritual authority resides in the living Church rather than in the ‘dead letter’ of Scripture. But the Church has authority only in so far as it remains truly the Church, the company of those who realise effectively that they are one with the Author by whose Word the universe of time, space, and duality is exfoliated from eternity.”[iii]

What were then the customs of this early Church?

Although this is too much of a controversial topic to deal with in a few sentences, what appears clear is that scriptures did not play a privileged role. This is also because the Gospels became available only one hundred or even two hundreds years after the Pentecost.

Early Christian writings and several references in the Bible indicate more an emphasis on joyous celebration, dance, music, contemplation and trance, rather than reading or analysing sacred texts. Dance was a vital part of the religious practices of ancient Israelites, and people were regularly exhorted to dance and play loud music in the Old Testament. Yet what I perceive as most significant in those dances and in all early Christian practices is the shamanic trance and shape-shifting element, which is also the essence of Pentecost itself.

The disciples are filled with the Holy Spirit and, as a result, begin to speak in alien languages. And it was indeed this capacity to enter into a non-ordinary state of consciousness and surrender one’s body and mind entirely to God that represented the sine qua non for gaining admission to the early Church.

The ancient shamanic practice of glossolalia (see: http://astore.amazon.co.uk/astroshamanis-21/detail/1556358539), or Speaking in tongues, is still the most prominent trait of Pentecostalism, Charismatic movements, and Charismatic Catholicism, which are also the fastest growing groups in today’s Christianity. Their practices, besides speaking in tongues, involve dancing in circles, jumping, shouting, crying and laughing, falling on, or rolling across, the floor, and other cathartic experiences.

Another form of trance common to early Christian mystics and saints, such as Anthony of Egypt, Benedict, Columba of Iona and later Francis of Assisi, Theresa of Avila, John of the Cross, to name just a few, involved unceasing contemplation and sensory deprivation, which are also customary elements of all deep shamanic experiences and vision quests.

The core element of the original Church is the direct experience of God’s presence as Love, through the intervention of the Holy Spirit.

The function of the Holy Spirit is to heal our fragmented mind. This means dissolving the insane idea of existing in a separate reality  filled with solitary identities in perpetual conflict or mutual threat, and unveiling our true common nature unceasingly united with God.

The Holy Spirit teaches that “Nothing real can be threatened. Nothing unreal exists.” (ACIM, T, I:2). He mediates between reality and the illusion of our separated self. This is possible because, “while on the one hand He knows the truth, on the other He also recognizes our illusions, but without believing in them. It is the Holy Spirit's goal to help us escape from the dream world by teaching us how to reverse our thinking and unlearn our mistakes. Forgiveness is the Holy Spirit's great learning aid in bringing this thought reversal about.” (ACIM, Preface, xi).

Forgiveness involves shifting from a perception based on separation to an ongoing communion with whomever and whatever exists. Spirituality is not a race for individual enlightenment or a fight to impose one’s religious ideas.

The Church is a holy communion of people. This is not founded upon the rightness of their doctrine. It is firmly based on the value of their loving connection with God and with one another.

“As you come closer to a brother you approach me, and as you withdraw from him I become distant to you. Salvation is a collaborative venture. It cannot be undertaken successfully by those who disengage themselves from the Sonship, because they are disengaging themselves from me. God will come to you only as you will give Him to your brothers.” (ACIM, T4,VI.8:1-4)

The early Christian practices are most pragmatic in the above respect. The Church becomes a sacred gathering where we step out of our private madness and safely release it as a common collective insanity. Through dance, trance, sounds and songs, overt or silent, grievances are burned away and turned into prayer. This is the Blessed Way of Passion that leads to the ecstatic presence of the void. Here the Holy Spirit unfolds and we can all sense our loving unity, sharing it with others, and shining it back as we see it in our brothers and sisters.

And, by the grace of God and the Pentecost, this is the trance original essence of the Church.


[i] As a matter of fact, in the Jewish equivalent of Pentecost (Shavuot), it is customary to eat dairy food and there are also special Shavuot recipes on this occasion.
[ii] The phrase “roaring of a mighty windstorm” is the literal translation of the Hebrew word ruah, meaning “spirit of God”, or in astroshamanic idiom, with the term Ruha, “spirit of Fire”.
[iii] Alan Watts, Myth and Ritual in Christianity, p. 189-190.

Books related to the above article: