Heaven & Hell: The Search for Meaning and Jurisdiction (by Franco Santoro) 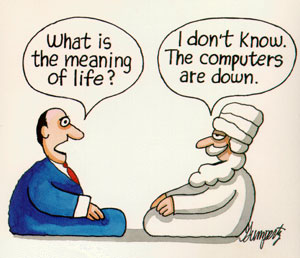 We live in a world in which we are constantly exposed to huge amounts of information. Never in the whole of human history have we experienced a time such as this. In the past most people would refer only to limited sources of information. No internet, no television, no e-mails, no radio, no written material, apart from, in some cases, a religious text, such as the Bible or other scriptures.
The fact that nowadays we have such superiority in accessing information does not necessarily mean that we get more understanding and meaning. On the contrary, what is more evident in these times is that the abundance of information appears to go together with a peak of scarcity in meaning.
There is a thirst and hunger of meaning, for we spend more and more time in processing information, while not having space to find out what this information truly means.
Hence we continue to remain at a level of basic alphabetisation, a state of intellectual infancy which prevents us to express any meaning in our communications.
As soon as I try to get into the meaning, there it comes another piece of information, which I need to acquire from scratch, and the work starts all over again. As a result the part in me that is nourished by meaning starves. And unless I am connected with the part that lives through meaning, which is indeed my true self, my life loses all meaning, and I become like a robot. I simply go on living, making ends meet in a meaningless world.
The search for meaning is the primary quest on the path. It is shamanically associated with the Intent and the first stage. Meaning is also the central theme of the first lessons of A Course in Miracles, such as Lesson 1 (Nothing I see means anything), 10 (My thoughts do not mean anything), 11 (My meaningless thoughts are showing me a meaningless world), 12 (I am upset because I see a meaningless world), 13 (A meaningless world engenders fear) and 14 (God did not create a meaningless world), which is the preliminary conclusion upon which A Course in Miracles further builds up. 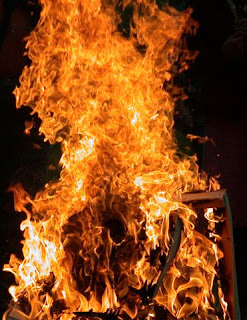 This always relates with the simplicity of the three stages or shamanic worlds, which no matter in what complex form or language they are defined (for Dante they are Inferno, Purgatorio, Paradiso), they are always three stages.
Our emotions and experiences encompass all three stages, and here one of the greatest tests is the confrontation with the fire of Hell (Inferno). This is where we are faced with real fire, which is different from a fire emergency test.
Hell is a burning reality, and not a superstitious fantasy. Hell is basically populated by folks, who continue to claim allegiance to a territorial jurisdiction of victims.
These are folks who keep on blaming others for what they have done to them, who continue to live in the past, who are stubborn to hold on to their territorial jurisdiction in Hell, whose only wish is to drag other people in Hell (especially those whom they blame or "love"), who thrives on sucking blood, who suffer and cry for help, and yet who tend to oppose or screw up all forms of healing attempts.
They are in desperate need of healing, and yet they will never be saved unless they resolve to get out of their territorial jurisdiction of victims, where the law of guilt, separation and projection applies, and move into a different state. The point is that this is not at all a difficult enterprise. All you need to do is simply to fill a simple application form, where it is only a matter of ticking the box that says "yes" to the question: "Do you accept to let go of your state of victim?", and then you are automatically admitted to the other jurisdiction.
The point is that, just as we may find it easy, for some people it is the hardest thing in the world. And the question here is: if they are not willing to get out of their Hell, how can I help them?
If they are resolute to stay in Hell, the obvious conclusion is that I need to go to Hell too. Yet if I go to Hell in order to help them, I may also end up being trapped there, just as they are.
This is the risk, and if I am truly concerned about their healing, I need to make it absolutely clear that I do no intend to get trapped in Hell, that I am totally entitled not to move a single step in that direction, unless I have taken all necessary precautions.
And what is the primary precaution? It is that of not going alone. It is going with God, and making sure that God is always with me, because as long as God is with me, I am not in Hell. Hence, I need to be absolutely clear about my territorial jurisdiction. That I abide by God's law, which is the law of Love and Unity.
Hell is a place where there is no God. God is Love, and Hell is a place where there is no Love. Love is Unity and Hell is a place of separation.
Since I was a child I have always had a passion for the United Kingdom. I simply liked the word “United Kingdom” and the sense of unity, security and power that it conveyed.
In the past years I have travelled a lot by plane, using various airlines, and yet my favourite one remains British Airways. An interesting thing about planes is that if I am in Italy at Bologna Airport sitting in a British Airways aircraft, I am still in the United Kingdom, and not in Italy. The plane is under British territorial jurisdiction, and as long as I am there, Italian laws do not apply.

Hence on one side I have a direct contact with Italy, I am right inside Italy itself, and yet officially and by law I am in the United Kingdom. In the same way I can be in Hell, while still being in Paradise.
Well, I’d rather find another example for the Italian version of this text…
Hence, whenever I move to Hell, I need to make sure that I remain on board of God’s vehicle. It is not me who is going to save those in Hell, it is God. And God needs to be visible for those who want to be saved, because it is only by getting on board that they can be saved.
The point is that some of them do not want to get on board, also because they may not see the aircraft at all. They cannot see God, or they do not want to see Him. They can only see me. It is me they want.
And here, the worst thing that can happen, which unfortunately does happen, is that in order to be of help and truly compassionate I lay aside God, who for them does not make any sense, and rescue them on my own. I give myself to them, which is all they want. And then we will be two in Hell.
A victim cries for help simply because she does not know how to get that help. As she does not know how to help itself, whatever she claims as source of help may be rather unreliable.
We can see many examples of these Hell people around us. Maybe some of them are just in front of us right now. If this is the case, please close your eyes for a moment.
Then, please ask yourself: is that person still there in your thoughts and emotions now that you have closed the eyes? I believe the answer is very likely to be "yes".
How come that I can still feel that person even if I do not see her-him anymore? And maybe I do not even need to close the eyes, so as not to see that person, because she-he is not there at all. Perhaps the last time I saw him-her was one week ago, or one year ago or even 20 years ago, or more! Hence, how come I can still feel him-her?
Well, you know the answer. Hell, and all the people who populate it, is not out or down there. Or, rather, the reason why it is down or out there is because it is primarily inside, and this is so unbearable that I need to find a way to get it out and splash it on someone else or damp it down there.
As seekers on the path, we all know these things. We know all the theories about projections and forgiveness. It is important to be aware of such theories, to have a mental understanding, because Hell develops first in the mind, and then moves in the emotions and the physical. And it is also vital to implement this mental understanding, to take action, to operate whenever required.
This is, as I perceive it, what we are called to do. I am aware it is not easy, which is one reason for supporting each other in this endeavour.
When the Fire burns there is no time for theories or spiritual speculation, I need to take immediate actions, and in those panic circumstances I am likely to forget most of what I have learned or even appear to have forgotten it all. In those moments I need to be able to seize a fragment of what I have learned, of what for me represents the truth. I need to find a way to grab God in the most direct and simple possible way.
Hence, the invitation is to have adamant clarity about this simple way. While this clarity emerges as part of the mystery on our ongoing path of initiation, and requires considerable patience to be grasped, it is also true that its essence is most simple and at hand for whoever is sincerely committed to the path.
Blessings, Franco


Click here for our calendar of holistic and astroshamanic events