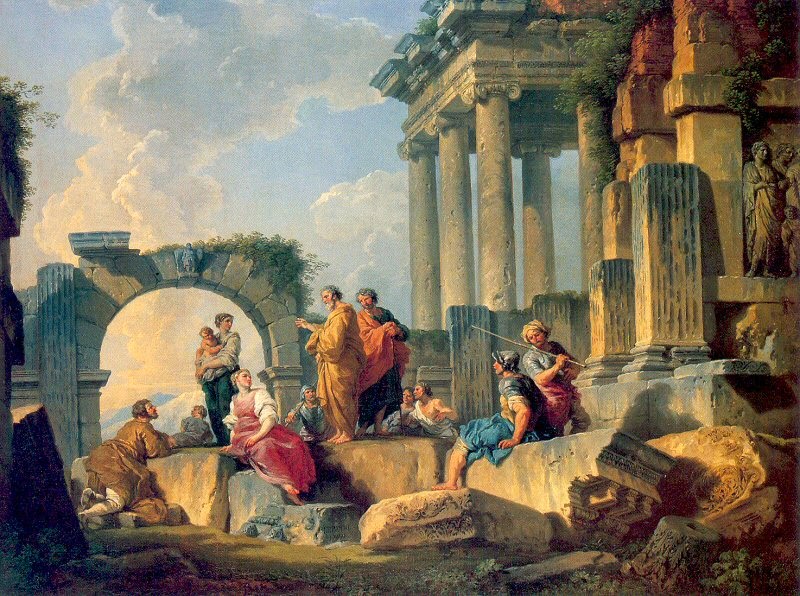 "I looked for a man among them who would build up the wall and stand before me in the gap on behalf of the land so I would not have to destroy it, but I found none.” (Ezekiel 22:30)

In ancient times cities were built with high walls around them as defence against enemies. If a part of the walls was destroyed the enemy could easily access the city through that gap. Hence standing in the gap required lot of courage because this was the most unprotected and dangerous position.

In the above passage God was looking for someone to stand in the gap of the walls in Jerusalem and build up the wall again, yet nobody showed up and the city was later invaded by the Babylonians. The gap and the wall God is referring to is obviously a multidimensional gap. And in this respect God may still be looking.

Between Pisces and Aries there lies a gap, a Mighty Gap, which is the quantum leap from one realm to another, a cross-road leading either to a joyful radical redefinition of our nature or to yet another forlorn change within the same looping story. And it is at this gap that mankind seemingly continues to miss its chance of redemption as cultures reach their apex and then fall again into darkness.

Pisces represents both the peak of human consciousness and the bottom of ignorance, just as Aries depicts both the beginning of a new age of light and loss of awareness or going back to square one. In Christian terms Aries stands as the resurrected Jesus, yet it is also the crucifixion, the elimination of the physical Christ and his absence from the outer world, which is the return to darkness for those who are unable to see His light within.


Pisces and Aries are respectively the last and the first of the 12 signs. The 12 signs are in shamanic terms the 12 fragmented parts of our soul or, in Christian language, the 12 apostles.

With Pisces the sequence of the signs is completed, which means that I have had an experience of all 12 parts. This does not imply that these parts have been fully retrieved and integrated. And even if I have managed to regain them, I can still lose them again. The retrieval process is exemplified by the sequence of numbers progressing from 1 (Aries), 2 (Taurus) and finally to 12 (Pisces). Yet when I reach 12 (Pisces), the linear sequence is challenged, and instead of moving to 13, it goes back to 1 (Aries).

In this Mighty Gap between Pisces and Aries there is a zone of dissolution. The traditional sequence cannot move further than 12 and there is no space for the 13th, which is bound to be sacrificed so that 1 can return and pave the way for another repetition of the previous cycle.

This is the nature of our separated reality: an ongoing loop, the same soap opera replicated over and over again, a dream of inevitable captivity with no chance of liberation unless we wake up from the dream.

The 13th is the sign of awakening, and as such it does not belong to the dream. As soon as it emerges, I acknowledge the dream as a dream, and no compromise is possible: either I embrace the 13th and get out of the dream, or I continue to sleep, as the 13th shifts into 1 (Aries). Here Aries represents both the 13th and the 1st.

The Ram rises as the Agnus Dei, the sacrificial Lamb of God that atones for the sins of mankind. It is Jesus Christ, the 13th sitting among the 12 apostles at the Last Supper.

In ancient numerology the number 12 represents the structure that makes up our 3rd-dimensional reality, or HAC, while number 13 is the portal to the multidimensional realm, or non-HAC. As such, the 13th exemplifies the dissolution of ordinary reality and a radical paradigm shift which shatters the conventional laws of the world. 13 is the reawakening of a perception that drastically reveals the illusory nature of our separated reality, threatening the survival of the ego.

This is why the number 13 has been regarded with suspicious and fear throughout the ages. There are abundant traditions and myths that narrate about a 13th member of a group who is betrayed, oppressed, sacrificed, killed or transfigured. The most known, besides Jesus and his 12 apostles, are King Arthur and the 12 Knights of the Round Table, the god Baldur and the 12 deities of the Valhalla, Mithra, Philip II of Macedon, etc.

In the zodiac signs the shift between each signs and their number is sequential, i.e. 1-2-3-4-etc., up to 12 where the sequence stops and all goes back to 1. It is in this shift that the mystery of the 13th dwells. It is here that the unseen is provisionally unveiled and become available only to those who have ears to hear and eyes to see.

On a pragmatic level, when I reach this strategic Gap, I confront the opportunity of definitively leaving behind outworn scripts, embracing the luminous story which longs to emerge, taking pragmatic steps in this regard and finally leap. Mind the Gap!