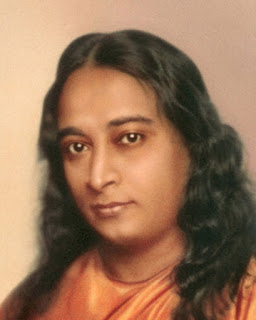 Paramahansa Yogananda: born on 5 January 1893 with Sun in Capricorn, Moon and Ascendant in Leo (10.5.5), Chiron Instrument, he was the first Indian yoga master to move and take up residence in the West. He taught the need for direct experience of truth, instead of blind adherence to belief systems.

“The true basis of religion is not belief, but intuitive experience. Intuition is the soul’s power of knowing God. To know what religion is really all about, one must know God.”

His teachings came from a lineage of gurus (including Sri Yukteswar, Lahiri Mahasaya and Mahavatar Babaji) and were based on Kriya Yoga, described as a "spiritual science of Self realization."

Yogananda considered Self-Realization as “the knowing in all parts of body, mind, and soul that you are now in possession of the kingdom of God; that you do not have to pray that it come to you; that God’s omnipresence is your omnipresence; and that all that you need to do is improve your knowing.”

Yogananda was also very familiar with astrology, which he defined as “the study of man's response to planetary stimuli. The stars have no conscious benevolence or animosity; they merely send forth positive and negative radiations. Of themselves, these do not help or harm humanity, but offer a lawful channel for the outward operation of cause-effect equilibrium that each man has set into motion in the past."

Yogananda is widely known for his best-seller Autobiography of a Yogi, which was an outstanding source of inspiration on my early spiritual path.

Outwitting the Stars: the following excerpts are taken from Yogananda’s Autobiography of a Yogi and refer to astrology. It is a conversation between Yogananda (Mukunda) and his guru Sri Yukteswar. The full text is available at: http://reluctant-messenger.com/yogananda/chapter_16.htm