The Chariot - Cancer: An Astroshamanic Voyage into the Tarot (by Franco Santoro) 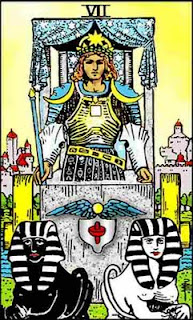 After the Emperor, the Hierophant and the Lovers, our journey through the Major Arcana moves on and reaches The Chariot. This trump provides an immediate sense of vigilance, control and solidity, which seem to prevail on the sense of mobility and parading given by the name of the card.

According to the esoteric system of the Golden Dawn, the Chariot is assigned to Cancer, whose glyph appears on the Charioteer’s sword belt, together with the Moon’s, which is also featured on both his shoulders. In the Rider Waite Tarot the Chariot is held by an armoured figure wearing a robust breastplate with a white square at the centre, emphasizing the quality of a grounded, practical heart.

The front part of the chariot displays the Hindu symbol of the lingam (male penis) penetrating the yoni (female genitals) and a winged orb. At its feet, instead of horses, there are two sphinxes lying down, one black, one white,[i] and facing slightly away from each other, as if they pull in different directions. The Charioteer holds a magic wand, yet his hands have no reins to govern the sphinxes, which he seems to control simply through his inner force. In the background there is a fortified town and a river.

The Chariot is the seventh card of the Major Arcana, emphasizing the cosmological order of the seven directions, exemplifying on one hand a triumphant mastering of, and liberation from, such order, while on the other the failure to move beyond this structure and a state of tragic captivity. As the seventh card, in a context where each stage comprises seven of the 21 cards (excluding The Fool, i.e. zero), the Chariot depicts the full maturation of the first stage of the Basic Ritual of the Sacred Cone, and the acquisition of the spirit medicines of the preceding cards, which are all featured in the Chariot.

This trump is also the gateway into the second stage, comprising the sequence from the eighth (Strength or the Justice, depending on the type of deck) to the fourteenth card (Temperance), which involves the release of the conscious ego and outer self. Upon completing the first stage consciousness reaches its maximum expansion, yet this superiority relates to our human separated reality and does not necessarily involve the higher Self. 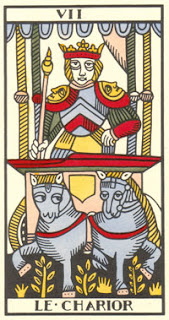 The Chariot illustrates a transition zone, where both our multidimensional mind, or Christ self (whose task is to free us from our separated identity), and the ego, which madly keep us blocked and captive, coexist. This, as the author of Meditations on the Tarot puts it, is the trial of the fourth temptation, the most subtle and intimate.

Here the seeker who has triumphed over the three temptations to the traditional vows of poverty (possessing everything while not being attached to anything), chastity (loving with the totality of one’s being) and obedience (unity with God),[ii] is tempted by his victory itself. It is the lure to act “in one’s own name”, to perceive himself as the master instead of as servant, that lead to spiritual arrogance, self-inflation and finally mystical megalomania, the most catastrophic of all scourges, which the Chariot is meant to unveil and heal.

In the above text, the author describes in details the esoteric chemistry of the process leading to the fourth temptation,[iii] which is the result of the mastership of the elements following the victory over the three temptations. This is exemplified by seven major miracles in the Gospel of John[iv] and by the seven aspects of the name of the Master, or Rainbow of God’s glory: "I am the true vine," "I am the way, the truth and the life," "I am the door," "I am the bread of life," "I am the good shepherd," "I am the light of the world," and "I am the resurrection and the life."

The risk is that one may identify oneself with, or allured by, the above aspects, and their glamorous effects, while at the same time embracing one’s inflated ego, and unconsciously fomenting separation. This is the main danger for mystics, shamans and all those who are committed to the spiritual path. What generates this separated world, with all its misery and grievances, thrives in a most subtle matrix, devoid of any apparent relation with its painful effects. It is a spiritual perilous zone, a surrogate of God’s presence, purposefully meant to cause confusion and test those who sincerely aim at connecting with God’s true presence.

The blatant features of separation, such as war, violence, hate, or disease, are merely the fruit of a disguised root, whose process of manifestation unfolds secretively, veiled by a canopy of bogus sacredness, which most human beings are incapable to detect. Only deeply committed seekers can perceive this matrix of separation, and be in a condition to purge and heal it, as long as they do not fall prey to the fourth temptation, which causes them to unconsciously inflate their egos as a result of their apparent superiority. 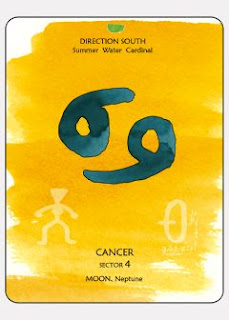 This is why throughout the ages the experience of many saints and spiritual healers indicate the quality of humility as a fundamental antidote on the path. As a result, since ancient times most monastic orders and spiritual communities have based their practice on the cultivation of this quality, which is exemplified by the saying ora et labora (pray and work), the only prophylactic remedy against the scourge of spiritual megalomania. Immunity from this major grievance is also the result of having had a direct experience of the Divine.

Here I would also add another relevant aspect of megalomania, to which the above author does not seem to refer to, is also found in all forms of fundamentalism, literalism and dogmatism. This, as I see it, is typical of those religions and churches, whose human representatives purport to be the highest authorities in matters of spirituality, morals and faith. While the sign of Cancer holds the luminous awareness of our ancestral traditions and doctrines, it may also express their shadow sides, which emerges whenever intolerance, fanaticism and narrow-mindedness prevail.

The Chariot displays both the ego triumph of megalomania and the real Triumph of aligning with one’s true Self. The card can either represent someone obsessed with grandiosity, intransigence and extravagance, at any level, including spiritual, or the integrated man, the master of himself, who holds in check the four temptations, as well as the four elements. 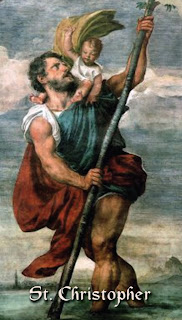 In Robert Places’ Tarot of the Saints, the Chariot is represented by Saint Christopher (the patron of travellers, pilgrims and drivers) with an image depicting the infant Jesus, leaving the city and crossing a river, riding on the saint as his chariot. The Self leaves the third dimensional realm (city-earth), crossing the fourth-dimension (water) and reaching the highest dimensions.

Here the Chariot operates as the Merkabah (the Hebrew word for “Chariot” and “Throne of God”), described in Ezekiel 1:4-26 as the four-wheeled vehicle driven by the four Jewish mystical angels (chayot), represented by the man, lion, ox and eagle, who in Christianity are assigned to the four evangelists and in astrology to the four elements and directions.

The term Mer-Ka-Bah is a trinity of words (Mer “Light”, Ka “Spirit”, Bah “Body”) found, with this or other forms, in most cultures. It is the chariot used by mankind to reach God, the divine vehicle allegedly used by ascended masters in order to allow the human body and soul to move from third-dimensional to multi-dimensional reality.

All spiritual healing practices are aimed at re-activating this chariot, a synonym of the Sacred Cone, the instrument of the plan of salvation and deliverance from our human arbitrary configuration (HAC).

For more details about the Merkabah click here. If you wish to see a video on the topic click here.

In a Tarot reading the Chariot may indicate a major turning point on the spiritual journey in which it is vital to question how we are moving on the path, testing our routine patterns and assumptions, and assessing whether we are truly connected with our Intent aligned with the Function.

The three-stage Basic Ritual of the Sacred Cone is an implementation of this process, which works as a spiritual MOT test (annual test of car safety and roadworthiness in the United Kingdom)[v] aimed at enabling the Chariot to safely continue the voyage through the second stage. The vehicle may look in its best conditions, just as the card exemplifies will power, control and self-assurance, yet thoroughly verifying its state may uncover hidden faults and whatever is beyond appearances.
[i] Plato in the Phaedrus describe the mind as a chariot drawn by a black and a white horse.
[ii] See previous article of this series in PAN 80
[iii] For those who resonate with these teachings I recommend to read the book, and in particular the references related to the vertical motions and respiration of angels (see Meditations of the Tarot, p. 149).
[iv] These miracles are the change of water in wine (John 2), the feeding of the five thousand and the walking on water (6), the healing of the official’s son (4), of the paralysed man at the pool (5), of the man born blind (9), and of Lazarus (11).
[v] Interestingly, approved MOT test stations are identified by a blue 'three triangles' logo.

For a selection of books on the tarot, please click here.
If this is feasible for you, please support our blog with a donation. Every donation of any amount is most welcomed. Also very small contributions are most appreciated

Readings and tarots connected with this article: